Yuzu are a mainly acoustic Japanese pop/rock duo with a lush and upbeat sound, made of Kitagawa Yujin and Iwasawa Koji, who started the band in 1997 while they still attended the high school in Yokohama (the group was initially named Lights). Beginning their career as street musicians, Yuzu soon went pro, releasing their debut EP, Yuzu No Su, in October 1997 via Senha & Co., a subsidiary of Toy's Factory, with which they've stuck ever since. For the next several years the band kept an intense record schedule: the second mini-album Yuzuman and the debut LP Yuzu Ikka came out in 1998; in 1999 there were two studio albums (Kajiki Sakura Saku Hen and Yuzuen) as well as four singles; and another full-length, Tobira, arrived in 2000. The hard work was worth it -- the band achieved a considerable level of success, with Yuzuman selling more than 200,000 copies and Yuzu Ikka staying in the charts for 17 months. Taking a two-year break from recording, Yuzu resumed a stable schedule again in 2002, releasing three albums in 2002-2004, and then following those long-players with Ribbon in 2006. By that time, they already had enough material for several best-of compilations, which came out in 2005 and 2007, the 2007 collection Yuzu No Ne: 1997-2007 entering the yearly Oricon Album Top 80 -- a feat repeated by their single "Harukaze," done with the violinist Hakase Tarou. In 2007 the band also provided the song "Ashita Tenki Ni Nare" for the movie Shaberedomo Shaberedomo. The album Wonderful World, produced by the composer Joe Hisaishi (a longtime collaborator of famous anime director Hayao Miyazaki) and recorded with a 70-piece orchestra, was released in 2008. 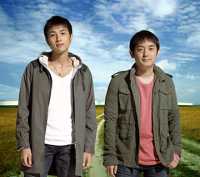