Yuri (born Yuridia Valenzuela Canseco on January 6, 1964) is a famous Mexican actress and singer born in the state of Veracruz.

At a very young age, Yuri showed artistic interest and she was accepted to a famous Russian ballet. However, she wasn't allowed to join because her parents were afraid of the prospect of little Yuri living in a foreign country.

When Yuri was 12, she participated in two famous Mexican television children's shows for Televisa, including the Cepillin show.

In the late 1970s, she released her first album and represented Mexico in the Festival Oti, reaching second place and winning an award as the best newcomer to the contest. In 1980, she was signed to a contract by Gamma Records, and her career took off, becoming widely known in Spain, El Salvador, Puerto Rico, Venezuela, Colombia, Panama, Argentina, and many other hispanic countries. But before she gained international superstar status, in 1982, she participated again in the Festival OTI, earning a fourth place.

During the rest of the 1980s, Yuri's albums often reached the top, earning her over 100 gold albums in Mexico. One of Yuri's most memorable hits of the late 1980s is "Que Te Pasa."

In 1994, Yuri and Chayanne were the stars of the Volver a Empezar telenovela, and in 1995, she married a Chilean musician. Later, she became a born-again Christian and has made Christian albums.

In 2005, she was chosen to host the new TV season of a talent contest for newcoming singers, Objetivo Fama that began in 2004.

Yuri is currently a judge on the second season of Cantando Por un Sueño. She also was a judge during its first season and performs on the show.

In 2006, Yuri released an album with an old co-star, Mijares, called Acompañame. It's title track, Acompañame, is a sentimental romantic ballad. 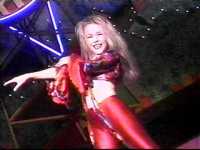