You're a Good Man, Charlie Brown is a 1967 musical comedy with music and lyrics by Clark Gesner, based on the characters created by cartoonist Charles M. Schulz in his comic strip Peanuts. The musical has been a popular choice for amateur theatre productions because of its small cast and simple staging.

John Gordon was credited with the book of the show, but according to Gesner's foreword in the published script, John Gordon is a "collective pseudonym" that covers Gesner, the cast members and the production staff, all of whom worked together to assemble the script

During the early 1960s, Gesner had begun writing songs based on Charles Schulz’s Charlie Brown comic strip characters but was unable to get permission from the United Features Syndicate to use the characters in his songs. Eventually Gesner sent Schulz a tape of some of the songs and Gesner soon had permission to record them, which he did in 1966.[3]

At the time, Gesner had no plans for a musical based on this pre-production "concept album." However, producer Arthur Whitelaw, who would later go on to write another musical based on Peanuts, encouraged Gesner to turn the album into a musical.[4]

The stage adaptation of the concept album, entitled You're a Good Man, Charlie Brown, went into rehearsal in New York City on February 10, 1967.[5] Prior to its opening, the musical had no actual libretto; it was several vignettes with a musical number for each one. 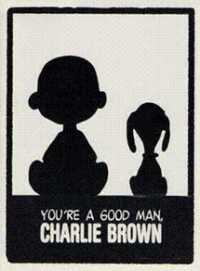