Now it's the money, that make this here world round'

And it's the money, that make you wanna lay niggas down

And it's the money, that make you and your best buddy fight

But when you ain't got shit, everything is tight

Cause it's the money, that make you wanna flex for them hoes

And it's the money, thats keepin' your nose full of that blow

And it's the money, that make you think that you bulletproof

But niggas 'll do what it takes, just to come up on loot

I came in this thang, a little short on change

All I had was a dime, couple rhymes, and my name

Tryin' to get in where I fit, stuck in this red dirt

Plannin' a way to get this money, but I can't get no work

I was hip to the game, can't let no time fly by

And though it's the money, that make you wanna shine

But believe it's the money, that make you want mine

Now nigga for real, got to pay them bills

Money got you fucked up, lay em' down for his

But homeboy still, you ain't even came up

The same way you got it, see your ass gonna get stuck

Thats tought from me, straight from a young buck

If your shoes ain't tied, then you bound to trip up

This money here, is a dangerous weapon, never get attached

Uh, ever since them first red and black Jordans

Till' when you couldn't get nothin'

for that little girl that you were courtin'

And done always been bout' how much paper you got

That money can get you a little twat, if you ain't gettin' off your rock

That money can make you, or break you

Them police shake you, cause your ridin' big-boy six hundred

Like a nigga ain't supposed to have nuttin', thats worth a lil' somethin'

The reason niggas gettin' chickens in and kickin' in doors

You gotta get it in, the only way you know how

Whether you click-click-pow or you delivering flowers

Then took his ass straight out the door, for a few G's

A couple of Oz's, and now you broke next week

Them little green court papers'll get you caught up in capers

Gone sour, money got niggas dying by the hour

Now is it me, or is it that you can't take it like a man

And man, ain't it sad, that your man hud (hid) and ran

From the time you started talkin' that shit, just like a man

So do what you can, cause see you lookin' kinda shawt'

Cause indeed you gone bleed on your knees, for now you've lost

In this maze, tryin' to find another way, just to escape all them filthy ways

So shake it off, and shake it loose, just as I've come to say

This ain't no dream, as you gleam, just as you cross between

Them foolish things, for that ol' green, got you seein' things

So what you mean, its the money that got you in this thang

From gettin' squirreled for a buck out in this world 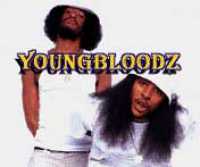