Artistically misunderstood, derisively known as the most famous widow in the world and vilified as the catalyst for the breakup of the most famous music group of all time, Yoko Ono in actuality is an uncompromising artistic visionary who was already an avant-garde superstar before she met John Lennon. Today, Yoko is finally recognized as an influential artist who pushes the boundaries of the art, film, music and theatre media. The present time marks a renewed resurgence of interest and celebration of her work. She has recently received high media profile due to the simultaneous reissue of her music catalog (including a boxed set) on the Rykodisc specialty label as well as for the premiere of her off-Broadway theatre piece Hiroshima. However these achievements obscure her body of 16 films made between 1964 and 1972, some in collaborative effort with her late husband.

Yoko Ono (whose first name translates to "ocean child") was born on February 18, 1933 in Tokyo, the eldest of three children born to Eisuke and Isoko, a wealthy aristocratic family. Her father was a frustrated pianist who held degrees from Tokyo universities in mathematics and economics. In 1935 he became head of a Japanese bank in San Francisco, as a result he did not meet Yoko until she was two years old, since she stayed behind in Tokyo with her mother.

When Yoko was 18, her father was appointed president of a bank in New York as the family settled in the affluent suburb of Scarsdale, N.Y. Attending the prestigious Sarah Lawrence College in New York, Yoko dropped out to elope with her first husband, Toshi Ichiyanagi. It was while living in New York's artsy Greenwich Village that Yoko discovered the world of avant-garde artists. Once absorbed in the scene,she began her life long association with art beginning with informal events then segueing into poetry while developing her fascination for conceptual pieces. Alienated as an "artistic radical" for years her work was ridiculed or ignored. That began to change once she began her working relationship with American jazz musician/film producer Anthony Cox, the man who would eventually become her second husband.

Cox financed and helped coordinate her "interactive conceptual events" in the early 60's. According to the artist these events; "Demanded a response and some input from the observer rather than answering all the questions". Her most famous piece was the "cut piece" staged in 1964,where the audience was invited to cut off pieces of her clothing until she was naked, an abstract commentary on discarding materialism (i.e. disguises) for the natural (i.e. the real)underneath. Yoko's work often demands the viewers' participation and forces them to get involved. A famous example is from her "This Is Not Here" exhibit from the early 70's. One section of the exhibit included a living room completely painted white with the objects; armchair, grandfather clock, desk, television set, even an apple, cut completely in half. The viewer must "complete" the scenario with a reference memory of the "whole" object. In other words art is a two part process--what is presented by the artist and how it is interpreted by its audience.

The marriage between Ono and Cox was a tempestuous liaison that produced one child--a daughter named Kyoko who was born on August 8, 1963. By this time, Yoko was heavily influenced by the extended and repeated image work of Andy Warhol, Dali inspired surrealism and Dadaesque absurdity. The latter is clearly evident in events such as having her audience pay a shilling to hammer a nail in a board--a satirical jab at consumerism.

The notoriety of Yoko's events, as well as her involvement with the radical 60's avant garde art collective Fluxus created an interest of her works in the United Kingdom. This interest precipitated her visit to England in 1967.

Yoko's life forever changed when she met Beatle John Lennon at an exhibit of her work at the Indica gallery in London. Lennon, in addition to being a pop culture icon, was also one of the most brilliant creative minds of all time, with an art school background. The mental stimulation between the two developed into a strong friendship which eventually blossomed into romance as well as a creative marriage. By 1968, their affair was public as both of their marriages disintegrated. A bad side effect of Yoko's collapse of her marriage to Cox was that he "kidnapped" their daughter during a weekend custody visit. To this day, Yoko has not seen her long lost daughter Kyoko nor is she aware of her whereabouts.

The "Ballad of John & Yoko" has been well chronicled. Until his untimely assassination in 1980, Lennon and Yoko enjoyed the ideal symbiotic relationship. Through each other, they enjoyed newer creative avenues to explore. Through Yoko, John collaborated on many art and film works. While Yoko's association with Lennon allowed her to find a unique voice with her avant-garde music which blended traditional Japanese music with "primal scream" inspired wailing that created a most abstract soundscape. Although misunderstood at the time, Yoko's music proved to be highly influential particularly to post punk "new wave" bands such as Talking Heads, Blondie and The B-52's. In addition the two staged a series of conceptual events to promote world peace during the volatile Vietnam era. The most famous of these was the "bed -in " held in an Amsterdam hotel room during the couple's honeymoon in 1969. Quite politically active at the time, the couple's mantra was John's composition "Give Peace A Chance."

It was during the mid-sixties that Yoko began to explore motion picture as another extension of her art. Her first film , 1964's Film No. 1 a.k.a. A Walk To Taj Mahal , breaks down the barrier between camera and audience as the camera takes on the viewers point of view walking through a snow storm.

Subsequent films can be subdivided by themes. The first of which can be grouped together by her fascination with the aspect and form of the (usually nude) human body. She almost seems to enjoy demystify the sexual aura by featuring repetitive shots of isolated body parts. This is best exemplified by the minimalistic approach of her film Bottoms which consists of a series of frames made up of nothing but hundreds of naked backsides. This theme continues in 1968's Up Your Legs Forever, which follows camera movement across the form of one aspect of a woman's body, as well as in her 1970 collaboration with Lennon entitled Fly. The latter depicts the movement of a fly along the landscape of a nude female body, augmented on the soundtrack by a voice piece by Ono that is used as the "voice" of the fly which correlates with the movement of the insect. The most infamous of the nude pieces is Smile --a 1969 collaboration with Lennon that consists of slow motion photography of a close-up of Lennon's penis achieving an erection, complete with a soundtrack of industrial and mechanical noises. 1968's Freedom can also be included in the body series and is also the first to incorporate a blatant feminist theme which she would expand on the following year with Rape . Freedom focuses on a woman pulling on the clasp of her bra, with the film ending just before it's removed. According to the essay "Yoko Ono: Objects; Films": "Ono plays with our sense of anticipation by constructing a metaphor for the liberation of the female body and self."

The next subcategory of Ono films are conceptual. Erection and Apothesis both share themes of movement and change. Erection is a pixilated film using stop motion photography at different speeds to document the construction and erection of a building at the same angle to present--in the words of the "...Objects; Films" essay: "..An almost organic form growing before our eyes". Apothesis follows the Lennon's ascending to the sky in a hot air balloon through cloud banks to symbolize a transcendental journey.

The last subcategory of Ono films can be described as documentations. Bed -In documents the Lennons honeymoon peace event in an Amsterdam hotel. While Two Virgins and 1971's Imagine gives outsiders a view of the relationship and their recording process respectively. Sisters O Sisters is a straight forward concert film of Yoko (backed up by John and The Plastic Ono Band) performing at a benefit concert in Ann Arbor, Michigan for jailed political activist John Sinclair.

When once asked what kind of artist she was, Yoko answered "I deal with music of the mind." Her imaginative concepts presented in her films may not be hummable in everyone's hit parade. However the thoughtfulness in examining new ways to explore issues strike a unique and resonant chord in the minds of many. 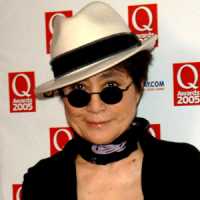