Imagine a record that matches the leftfield edge of Beck or Radiohead with the kind of sure-footed pop hooks Justin Timberlake's people would write a blank cheque for. A record which vividly conjures the life of an insightful outsider, set to the dark, loping rhythms of Massive Attack or Portishead. A record built around a voice that's as sweetly expressive as it is richly soulful. Then imagine that every single sound of it, including the bass & the drums, is performed by one man on his amazingly versatile guitar. That record is Charmed & Strange.

The road towards this striking album began in Cape Town in the late 1980s, when a nine-year-old boy began sneaking to his neighbour's house to listen to Wham! and OMD. At Yoav's house, such "light music" was banned, on the insistence of his father, a Jewish architect who lived through World War II in his native Romania, before moving to Israel (where Yoav was born) and then relocating to South Africa with Yoav's opera singer mother. Only classical and opera would waft through their home.

That only made the pull of modern music stronger for little Yoav. "From the moment I started listening to those cheesy songs at my neighbour's house, I knew I'd be a musician. I can't describe the rush it gave me. The fact that music was an illicit pleasure actually made it the most exciting thing in the world for me."

By the time he was 12, Yoav was waiting until his parents had gone to bed before quietly practicing on the battered guitar his elder brother had given him. "I'd had to play instruments that I hated since I was four, things like the piano and the cello," he says. "I guess the guitar was my way of rebelling."

As he hit his teenage years, Yoav continued to consume music with an insatiable hunger, always pushing at the boundaries his parents had set. He began with the relatively safe sounds of Simon & Garfunkel and the Beatles, before moving onto the dark pop music of U2, Depeche Mode and The Cure. Phases of devouring hip hop, grunge and electronic music followed.

Growing up amidst the cultural boycott of apartheid-era South Africa, Yoav had never been able to see the bands he loved play live. But as the old order finally began to crumble, Paul Simon led a new wave of touring acts visiting the country. From that point, Yoav went to see every band that visited. A Crowded House show, when he was 15, proved particularly memorable.

"They did a thing where they asked if anyone in the crowd wanted to come up and sing," he says. "They chose this guy, but he sucked and they threw him off after two lines. I was quite near the front and a lot of people near me knew I could sing, so they were all pointing at me. Neil Finn said, 'OK, one more' and next thing I know I was on stage in front of 15,000 people. I started singing 'Into Temptation' and the place just went nuts. I did the whole song and then got this massive ovation."

That night, Yoav went to bed convinced that music was his calling. Those who witnessed his performance seemed to agree; the local media were so impressed they speculated that his appearance was a set-up, arranged by Crowded House to get the crowd going.

Suitably encouraged, Yoav began to focus on his own songwriting. "I'd written poetry since I was a little kid and there were always melodies in my head, I just had to learn how to bring them together." By the time he finished high school at 18, he was regularly demoing his songs in local studios.

After a year at university, Yoav dropped out to head to London, armed with little more than demo tapes and big dreams. "It was hopeless," he says. "I spent three weeks trying to shop my music around, with absolutely no joy." But just before Yoav was due to head back to South Africa with his tail between his legs, he got a phone call. His cousin in New York had found herself sitting next to a record executive at a fundraising dinner, with Yoav's demo in her bag. The exec listened to it on his way home. Struck by Yoav's powerful singing voice, he called to offer him a development deal.

Within a few weeks, Yoav had relocated to New York. Compared to Cape Town, the city was a thrilling sensory playground. Yoav threw himself into everything NYC had to offer, feasting himself on countless gigs and disappearing into clubland.

At this point, Yoav's music was what he describes as "pretty conventional singer-songwriter stuff". It was good enough to get him to America and onto the stages of venues like the Mercury Lounge and CBGBs, but it didn't reflect his love of clubbing, electronic music and hip hop. Then one day everything changed. "It was summer solstice and I'd gone with my guitar and some mushrooms into Central Park. The plan was to zone out and lose myself in my playing. For some reason, I started banging out rhythms on my guitar and I got really into it. There was this school field trip of 7 or 8 year old kids walking by and they suddenly started dancing to what I was doing. I was playing these crazy drum 'n' bass rhythms and they were whirling around me like trance hippies. It was incredible. I felt like I was DJing with my guitar."

Yoav had stumbled upon his new direction. "As a songwriter, the guitar limits you to strumming or picking. It's very different if you can write something to a beat. I tried to translate dance music to guitar. I started pounding it, learning what I could do with it, using it as my decks. You can get an assortment of kick drums and snare drums by hitting it in different places or a synthy sound by playing with feedback. The more I did it, the more possibilities I found. It became all-consuming for me."

After spending the next few months writing songs to go with his new, beat-driven sound, Yoav sent one of the first finished tunes to Johannesburg's main pop station to gauge the response. When he didn't hear anything back, he forgot about it. "Then a few months later I Googled myself and discovered that it was a top 5 hit in the station's chart. No-one knew who I was, but I was competing against Gwen Stefani and Justin Timberlake. So I went back to South Africa and played some shows. I decided to make all the sounds on my own, with a loop pedal and a delay pedal. The response was amazing. I knew then that it was time to make an album."

Unfortunately, the US execs didn't agree, telling Yoav his sound was "too unique". After five years in New York, his development deal had come to nothing, so he came back to the UK in 2006 to try his luck with some contacts here. This time, the response was instant. "I played for a couple of producers and they both immediately said they wanted to work on a record." Early recordings quickly attracted the attention of new label Field Recordings. A deal was signed and Yoav made Charmed & Strange in Oxford and Montreal. Every note of it is played, teased, tapped and pounded out of his guitar.

The album opens with the hypnotic Adore Adore, followed by Club Thing, a seductive tale of clubland excess in which Yoav proves he only needs his trusty acoustic to compete with Timbaland's beat-making. From there, one darkly uplifting song trips into another. One By One is a sighing eulogy to friends lost too early to responsibility; the yearning first single Beautiful Lie muses on disintegrating relationships and hidden truths; the groove-laden Yeah, The End paints a vivid picture of impending apocalypse; and the album is rounded off by a gorgeous, slowed down cover of the Pixies’ Where Is My Mind? that could tear a heart at a hundred paces.

It's a record that sounds unlike anything else around, edgy and original, but with the tunes to light up daytime radio. "I've been told it sounds like Damien Rice produced by the Neptunes, or an acoustic Nine Inch Nails, or Beck meets Buckley meets Björk. I'm not sure any of those is right. I guess I'd just say it's left-of-centre pop music inspired by all the big themes in my life and all the music I've been into. It's been a huge and often frustrating journey to get me here." Yoav allows himself a smile. "But it's definitely been worth it." 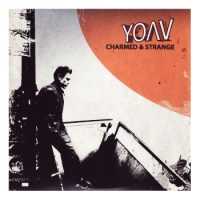