Yngwie J. Malmsteen arrived on the scene in 1983 when he emigrated to America from his native Sweden. Malmsteen created a style - an ear-searing blend of metal bombast and classical beauty that is one of the most immediately recognizable of ALL guitarists. He elevated classical chops to new heights, adding a definite European stamp both dark-sounding and blindingly fast.

"I've been exposed to classical music since I was five years old," says Yngwie, who was born in Stockholm on June 30, 1963. "My mother listened to Bach so much, and I grew to really love his music. Bach's chord progressions and melodies are the most beautiful things ever written.

"My family was very musical," he adds. "My sister played flute and piano and my brother played guitar, drums, piano, violin, and accordian. My father even played guitar."

Malmsteen maintains that his biggest classical influence is 19th-century violin virtuoso Nicolo Paganini. "I was in my early teens the first time I heard his music," recalls Yngwie," and he's been my idol ever since. I got turned on to him through a Swedish TV show. A Russian violinist was playing some Paganini stuff on the program, and I freaked. I quickly put a portable tape recorder in front of the TV to get it on tape. When I found out later what the guy was playing, I went out and bought Paganiniâs "24 Caprices," which is my all-time favorite thing to listen to.

"Thatâs how I wanted to play guitar. He did with his instrument what few have ever come close to doing. He was a rock and roller-very wild and very extreme."

"Those compositions ["Black Star" and "Far Beyond the Sun"] sort of sum up my style," says Yngwie. "There are fast runs, slow harmonies, and some really nice arpeggios in them. Those songs are like icons for me. I'll probably play them until the day I die."

Malmsteen first picked up a guitar on September 18, 1970-the day Jimi Hendrix died. "Hendrix did inspire me to play," Yngwie affirms, "but I was more influenced by his image than his music. He looked so cool and was a fantastic performer."

Says Yngwie: "I don't think anyone can actually teach someone how to play guitar. The desire should come from inside. Guitar is at a stage where one has to do oneâs own innovations. Playing electric guitar is not like playing classical violin, which has been around for hundreds of years. To play classical violin, one has to be taught the specific skills needed to perform that particular kind of music. Once you get past the basics needed to play guitar, the rest is up to you."

Guitarists with mind-boggling technique can be quite boring on stage, but Malmsteen impresses as well as entertains. He is always in constant motion, whether playing his Stratocaster with his teeth or twirling it around his body.

"When I play a song at rehearsals I often get bored with it," he admits. "But as soon as I get in front of an audience I'll get excited and everything comes alive. I'm not just playing for myself. I live for my audience-they're everything. It's the best feeling imaginable to go on stage and have the crowd love you. As long as there's an audience, I'll never lose the desire to play." 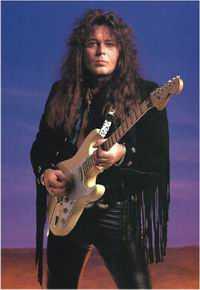