With 1981's Claro Que Si, Yello made its first forays into music video; their clip for the single "Pinball Cha Cha," directed by Meier, garnered considerable acclaim and in 1985 was selected as one of 32 works included in the Museum of Modern Art's Music Video Exhibition. Visual accompaniment remained a pivotal component of the duo's work after they signed to Elektra in 1983 for the LP You Gotta Say Yes to Another Excess, as the videos for "I Love You" and "Lost and Found" received heavy airplay on MTV.

1985's Stella proved to be Yello's commercial breakthrough: while the singles and videos "Desire" and "Vicious Games" found success upon their initial release, the duo enjoyed a delayed hit with the album track "Oh Yeah," which reached the U.S. singles chart after being prominently featured in the films Ferris Bueller's Day Off and The Secret of My Success. After the remix project 1980-1985: The New Mix in Go, Yello recruited diva Shirley Bassey and ex-Associate Billy McKenzie for 1987's One Second.

Despite the success of 1988's Flag, which contained the international hit "The Race," over the course of the next several Yello grew increasingly involved with film projects: after scoring the comedy Nuns on the Run, Meier directed his own feature, 1990's Snowball. In 1991, the duo resurfaced with Baby, followed three years later by Zebra. 1995's Hands on Yello compiled reinterprations of the group's songs by the likes of Moby, the Orb and the Grid, while Pocket Universe, a collection of new material, appeared in 1997. — Jason Ankeny 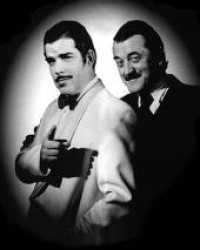