Having supported White Stripes and The Strokes early on their New York shows are now consistently sold out and there is huge anticipation in advance of their first European shows this spring.

The band have the honour of opening for Jon Spencer Blues Explosion on their European tour and will then play a week of headline shows in the UK.See the tour dates page for details.

The "Yeah Yeah Yeahs" ep will be released at the end of April and contains 5 tracks recorded with Jerry Teel of Boss Hogg./Knoxville Girls fame.

Yeah Yeah Yeahs have a US tour with Girls Against Boys prior to crossing the ocean and are currently in the midst of doing a host of press for European publicationsto coincide with the tour. 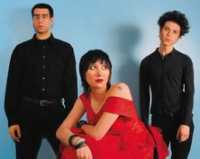