There was a time when pop music didn't immediately mean identikit boy/girl bands singing close harmonies to an interchangeable backing. The early 80's saw a resurgence in the quest for perfect pop which was based as much on experimentation and the perfect beat as it was on the memorable hookline. Cheeky smiles and knowing winks simply weren't enough to stake a claim in the hearts of the nation.

As founder member and main songwriter for Depeche Mode, Vince Clarke had already made his mark with such classic pop songs as "New Life" and "Just Can't Get Enough", yet arguably it was with his next band that he firmly worked his way deep into the living rooms of Britain. Departing from Depeche Mode swiftly after the release of their 1981 debut album "Speak And Spell", Yazoo were formed in 1982 when Clarke replied to an advertisement placed by Alison Moyet in the Melody Maker, looking for "rootsy blues musicians".

Though the pair were a seemingly unlikely combination, any doubters were soon forced to eat their words when their first offering hit the shops in May 1982. Featuring Moyet's gorgeous soulful lament layered over Clarke's trademark synth melodies, "Only You" was a fine weave of heart tugging techno-blues; the fusion was addictive. Yet it was clear that Yazoo represented much more than just the latest pop band, playing as they did with the media's idealised notions of beauty, sexuality and fame: Vince the bleach haired, floppy fringed, part fey part shy anti-lad; Alison with her deep, lustrous voice, oozing a beauty and charm that was all its own.

In July '82 the duo released their next single, "Don't Go", an up tempo tune where Alison's powerhouse vocals played counterpoint to Vince's distinctive hooklines. The song was another huge hit and offered the perfect introduction to the duo's debut album, "Upstairs at Eric's". Also released in July '82, the album explored the pair's unusual potential to stunning effect. From the raunchy synth funk of "Goodbye 70s" to the chilling darkness of "Winter Kills", it was one of the most complete debut albums to have emerged throughout the decade as a whole, with the cover image of dismembered showroom dummies echoing the musicÕs sense of dislocation from the standard pop formula.

Having taken to the road for rapturously received sell out shows, Yazoo consolidated their early success in November '82 with new material appearing in the shape of their next single, "The Other Side of Love". Providing the duo with their third hit, the slow, ebbing ambience and oriental melody of its b-side "Ode To Boy" also offered evidence that the originality of the band's songwriting had not been diminished in the slightest, a fact made clear in April 1983 when the duo released yet another memorable pop classic in the shape of "Nobody's Diary".

Yet this release was overshadowed by continuing rumours of a split in the Yazoo camp. The duo's relationship had become increasingly tense, and in July '83, on the eve of the release of the second album, "You and Me Both", they announced they were splitting up. Notwithstanding, the album still entered the the charts in poll position, ably maintaining both critically and commercially the high standard achieved by "Upstairs At Eric's".

From here Vince and Alison went their separate, yet celebrated ways: Vince joining up with Andy Bell to form the extremely successful partnership of Erasure, whilst Alison forged ahead with her own auspicious solo career. What they left behind them were two remarkable albums and a string of brilliant singles. Though their time together as Yazoo was brief, the impression that Vince and Alison made on contemporary pop music is something far more enduring.

Text taken from the official 'Only Yazoo The Best Of' press release. 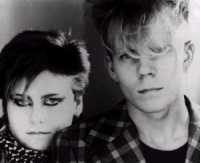