Xysma was a Finnish band that was founded in 1988 in Naantali, a small town near Turku. The band split up in 1998.

In the beginning Xysma played grindcore and death metal. The bands played at the legendary Turku underground center Panimo, and created a short-lived but intense scene. Soon after, the death metal/grindcore influence spread to the Helsinki area, with bands such as Abhorrence (which soon evolved into melodic death metal classic Amorphis).

Xysma's first demo, Swarming of the Maggots, was shared widely via tapetrading and became a cult classic (it was remastered and released on the 2004 Xysma compilation CD). Musically, the band were inspired by the early classics in the genre like Carcass and Napalm Death. With the following mini-albums, Above the Mind of Morbidity and Fata Morgana, the last one released in the United States through the infamous Seraphic Decay label, Xysma evolved towards less extreme metal.

Since Xysma was a part of the rise of Scandinavian death metal, they had close bonds to the scene in Stockholm, Sweden, occasionally travelling to and playing in Stockholm, and visiting their colleagues from Entombed and others. Xysma also recorded their first album, Yeah (1990), in Sweden, in the Sunlight Studios of producer Tomas Skogsberg.

Xysma's third album, Deluxe (1993), was no longer a death metal album, not necessarily even a metal album. The songs were hard-paced, in the vein of Helmet. Janitor no longer growled, as he sung in a clean style. The next album, Lotto (1996), was a full-blooded rock album with a very retro style; one of the tracks was featured later in Brian De Palma's movie Snake Eyes (1998). The band also released an EP called Singles, containing covers of classics sung in a schlager style.

Xysma's fifth and final album, Girl on the Beach, was more or less a pop rock album, and tension between the members grew. Eventually the band decided to quit, and though they played occasional gigs since, there had been no talk of reunion.
Guitarist Toni Stranius (6-9-1972 – 7-7-2006), member of both Xysma and Disgrace, died in 2006 after a heart attack, in Ireland, where he lived. A memorial gig in his honour was held on 15 September 2006 in Bar Päiväkoti, Turku. All of Stranius' bands (including Disgrace, Xysma and Finnish rock band Kalsaripaita) played at the occasion, reuniting Xysma just for this special event. 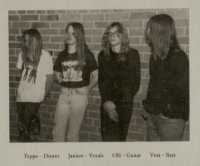