Emerging from the British Punk/New Wave movement of the late seventies,
XTC quickly established themselves as a band that transcends either category with the angular, hook-filled "White Music" album, featuring the songs, unconventional guitar and voice of leader Andy Partridge, bassist/vocalist/songwriter Colin Moulding, quirky organ by Barry Andrews and drummer Terry Chambers. One more album with this line-up, "GO2", quickly followed. After this less accessable collection, Andrews left to form Shriekback. He was replaced by guitarist/keyboardist Dave Gregory and in the first few years of the 80s, XTC produced the three albums, "Drums and Wires", "Black Sea", and "English Settlement" that firmly established them as one of England's "bands to watch".
Combining literate, pointed lyrics with Beatles meets Captain Beefheart(!)
instrumental sensibilities, XTC seemed poised for stardom when they unexpectedly stopped touring in 1982 due to their leader's stage fright.
Despite this seemingly career-ending move, the band, without the muscular drumming of the departing Chambers, continued issuing albums of stunning originality and depth, using hired hands to fill the drumstool. "Mummer", "The Big Express" kept their cult following satisfied and "Skylarking" achieved some wider success, largely due to the accidently-a-hit single "Dear God", a b-side originally left off the album.
The follow-up, "Oranges and Lemons" recieved a high profile release and a moderate hit with the Moulding-penned "King for a Day", but it would be four years until the next release, "Nonesuch", which yielded the hit "Peter Pumpkinhead." Having established a fairly large fanatic fan base, the band, nonetheless found it necessary to "go an strike" until they could be released from what they felt was an extremely unfair contract with Virgin Records. Upon the success of that strategy, XTC found itself with a huge backload of great songs and quickly released the orchestral "Apple Venus part 1" and the more guitar-oriented "Wasp Star" at the beginning of the new century. Unfortunately, Dave Gregory abruptly quit the band and only plays on the earlier album.
From a quirky new wavish live band to a more sophisticated studio duo producing lush, very English and personal gems, XTC boasts a prolific and varied catalogue of great songs, and near-worship from their devoted following. 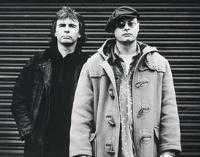