Sultry. Seductive. Insinuating. Knowing. Soulful. Sexy. Womanly. Xscape.
On Traces Of My Lipstick, Xscape's third full-length album on So So Def Recordings, the "million dollar girl group" from Atlanta, Georgia, has created an album that is Xscape's most mature and provocative to-date, filled with an emotional depth that speaks to the quartet's growth both as performers and as women.

Brimming with uptempo grooves and slinky, heartfelt ballads examining love in all it's complexities, Traces Of My Lipstick offers solid proof that LaTocha Scott, her sister Tamika, Kandi Burruss and Tameka "Tiny" Cottle have staked their claim as one of the premier female vocal groups of the 90's.

Traces Of My Lipstick is the long awaited follow-up to the group's platinum 1995 RIAA-platinum release Off The Hook, and if you ask the members of Xscape why it took nearly three years for new music, the answer is simple. "We wanted to take our time and give our fans something real," Tiny explains. "It was important that this time we had the right sound, the right songs and the right approach."

Part of the right approach was to reach out to members of the music community, many of whom Xscape had never worked with before. On Traces Of My Lipstick, Xscape join forces with some of the biggest and best practitioners of urban/pop today: the group's longtime creator/collaborator/mentor Jermaine Dupri, Daryl Simmons, Babyface, Keith Sweat, Joe, and Diane Warren. Warren, who has penned number one hits for Toni Braxton ("Unbreak My Heart") and Monica ("For You I Will") gave Xscape the soaring and reflective first single "The Arms Of The One Who Loves You." "We all really like her music and the way that she expresses herself," explains Kandi. LaTocha adds, "working with someone like Diane Warren certainly raises our game to another level... which is exactly why we wanted to work with her."

Among Traces Of My Lipstick's highlights are the smash single "Am I Dreaming," which features the hot vocal act Ol Skool and was produced by Keith Sweat; the gentle harmonies of "The Softest Place On Earth," written and produced by R&B star Joe; and "All I Need," which was produced by Xscape's Tamika Scott.

Although ballads have always been part of the group's vocal repertory (who can forget the haunting hit "Who Can I Run To?" from Off The Hook?), this time around the women of Xscape wanted to slow things down, even more. But don't worry, Xscape can still rock the party... just check out the lips-smacking "All About Me," written and produced by Jermaine Dupri. But the overall tone of Traces Of My Lipstick is moodier, mellower, and much more mature. "It seems that this time, we were in the frame of mind to record ballads," explains Tiny. "And coincidentally, a lot of the tracks we liked were also ballads. So, without even really planning on this being a more serious record, that's exactly what it became!"

"Plus people have to remember that it's been five years since "Just Kickin It" (the group's first platinum single)," smiles LaTocha. "We're women, we've got families, we see things and relationships in different ways than we did back then. So it only makes sense that our material would be more sophisticated and, well, grown up!"

Part of that maturity can be felt in Traces Of My Lipstick's understated theme: that of love from the perspective of the woman and the point-of-view of the other woman. The imagery and provocative nature of the phrase "Traces Of My Lipstick" is meant to raise eyebrows and make people think. "It's pretty powerful, that whole idea of being the woman who's being cheated on," explains LaTocha, "and it's also pretty deep to be the woman who's doing the cheating! And without giving too much of our business away, you can say that we know both sides... intimately."

That sense of intimacy, combined with superlative harmonies and undeniable appeal, have helped make Xscape one of the biggest and most popular R&B singing acts of the decade. Born and raised in Atlanta, Georgia, these childhood friends first gave the world a taste of their soulful sound with their 1993 debut Hummin' Comin' At 'Cha. The CD, which boasted the hit singles "Just Kickin' It" and "Understanding," went platinum and quickly established Xscape as a force to be reckoned with.

That success was eclipsed by their explosive sophomore CD Off The Hook, which was released in 1995. Like it's predecessor, Off The Hook would go platinum while yielding three gold hits, "Feels So Good," "Who Can I Run To?" and "Do You Want To."

With the marketplace seemingly glutted with interchangeable girl groups, the career of Xscape is well-worth noting. With the confidence and skills that can only come from seasoned, savvy experience, Xscape have come up with what the group's strongest, most personal and soulful CD to date. Ask Xscape to sum up the vibe of Traces Of My Lipstick and there is no hesitation: "It's who we are. It's us as women, lovers, mothers and singers." 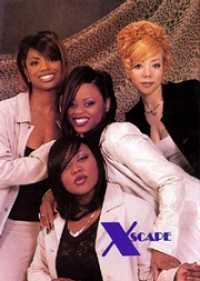