Xonia was born in Melbourne, Australia, where she started her music career at the age of 8 and by the time she turned 14, X had signed with a record label. As an anxious and naive young girl Xonia developed her musical knowledge and reached a clear understanding of the artist she wanted to become.

Xonia began creating a unique music style through the creation of her original material and moulding into a professional singer with experience through live performances.

In 2006 Xonia was selected to represent Australia for the international Beauty Contest ‘Miss Diaspora’ which gave her the opportunity to taste the music industry having been invited to perform in front of 20,000 live spectators at the Callatis Festival.

The Romanian showbiz industry was so impressed with her talent that she was invited to perform on various TV shows including Horia Moculescu’s ‘Slagare In Revenire’ and Stela si Arsinel- Sare si Piper. Her music received air play and she appeared on magazine covers and had frequent newspaper circulation. 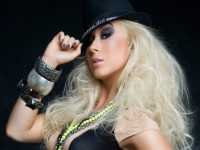