XLR8 member Carlo Lazerna was the one who thought of the name for their group which was inspired by a character from an American cartoon series Ben 10. XLR8, the cartoon character is an Omnitrix alien that resembles a semi-armored velociraptor, the base creature for the form’s design. XLR8 is pronounced as ‘’accelerate’’ in relation to its “Kineceleran”(portmanteau of the words ‘kinetic and ‘accelerate’) nature that equates to its power and its speed in attacks and motion. Thus, naming their boy group as such reflects the group’s success goals and artistry is in accelerating mode. They also named their official Fan Club as A.FM or “Accelerated for Music” relevant to their group name. 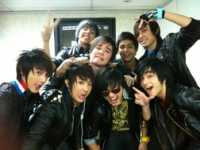