XIV Dark Centuries is a Pagan Metal band from Thuringia, Germany. The band’s lyrical themes are about Germanic Paganism and the Thuringian tribe.

In September 2006 the new album is released Skithingi, which is now sold through the German label Perverted Taste. There are invariably contain new titles taken from the musically creative period of Jul and the following year. The songs are varied, however, be catchier than the older material, according to the band. Lyrically, the album follows seen a concept that deals with the demise of the Thuringian kingdom.

So far, all releases of the band in their own studio recorded and produced. 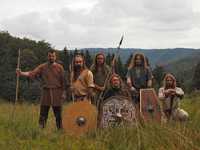