Xeronimo is a Mexican singer and songwriter.

In 1995 he met with Eugenio Cobo, actor and artistic director of Televisa and Amparo Rubin, record producer, and began taking classes at this school, where students share classrooms with between 18 and 40. With only 12 years travels every Tuesday night for 8 hours by truck to receive intensive instruction and return on Thursday night at Ciudad Victoria to continue his studies. This continued in high school for 2 years with special permission from their school.

In 1997 traveling with Rubin and Loris Ceroni Amparo, who would become his musical producers, Riolo Terme, Italy, to record, in studies that compose 13 songs Ledun this first album called "Love Anonymous" at the hands of Universal Music and Televisa Music. In this first production fell off 3 singles: "Following your steps," "Girl vain" and "Nothing makes a place" which reached the top spot on the national lists of radio and television in Mexico.

In 2001, just turned 18 years, he moved to live in Miami, Florida. Here begins to interact with key figures in Latin music such as Gustavo Santander, Rafael Vergara, Jose Miguel Velasquez, Jorge Luis Piloto, Yoel Henriquez, Tulio or Juan Vicente Zambrano Cremissini. This results in a new stage musical, a vein much Latin and a new way of understanding music for him.

In 2004, after spending three years immersed in the Latin music of Miami signed a contract with record producer and Waiter Music in Spain to carry out a new album. This is how the hand of music producer JG Mansur (his brother) made ​​this second album, recorded in Miami called "Xeronimo." In this album stand out 3 singles: "And if you forget" the first single released in Spain and which won the prize "Best New Artist of the Year" Chain Dial, "Amarte" and "Gypsy" being one of the most notorious in the summer of 2005.

In July 2010 goes on sale in Spain, Mexico and Latin America "Runaway" recorded between Madrid, Rome, Miami and Mexico at the hands of its producer JG Mansur and a tandem between Waiter Music and Sony BMG.

It is currently in full promotion of his first single "Runaway" which gives its name to the album. Visiting major cities in Mexico 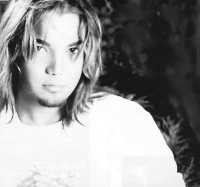