Static-X is an American industrial metal band from Los Angeles, California. They were formed in 1994. They are signed to Warner Bros. Records and have released six albums, their most recent being Cult of Static, which was released on March 17, 2009.

The band rose to fame with their debut album Wisconsin Death Trip, which went platinum in 2001. However, this is the only album they have released to date that has reached such sales levels. Their sound incorporates elements of a sub-genre called industrial metal. Static-X often refer to themselves as "evil disco".

Static-X has released six studio albums, one compilation album, one EP, twelve singles, twelve videos and a guitar tab book entitled Static-X Guitar Anthology. They recorded a DVD entitled Where the Hell Are We and What Day Is It... This Is Static-X, but it was never released due to a threatened lawsuit by Sharon Osbourne over tracks recorded at Ozzfest.

During recording of their follow-up album Machine, Koichi Fukuda left the band to spend time with his girlfriend and pursue other musical opportunities. Fukuda was only on one song "Otsego Undead" as keyboardist, which was on the soundtrack to Dracula 2000. As Fukuda's replacement, former Dope member Tripp Eisen stepped in. Machine was released May 22, 2001 to major success, and shortly after, Static-X began work on their third album, Shadow Zone, this time with Eisen performing and writing on the album. However, before they could start recording, Ken Jay left the band due to musical and political differences. To drum on the album, Josh Freese of A Perfect Circle and The Vandals was brought in. Later, Nick Oshiro, formerly of Seether, was selected as Jay's replacement and the band's permanent drummer.

During production of the album, Jonathan Davis of Korn contacted Wayne Static to record the vocals for a song he wrote for the Queen of the Damned soundtrack, entitled "Not Meant for Me" as well as contributing the song "Cold". A music video for the song was included as one of the special features on the dvd release (see: Queen of the Damned). Shadow Zone was later released on October 7, 2003. Static-X continued their affiliation with video game soundtracks: "This Is Not" from Machine, was included in the video game Shaun Palmer's Pro Snowboarder; "The Only" from Shadow Zone was featured on the soundtrack of Need for Speed: Underground.

The band began their sixth studio album, Cult of Static, in January 2008 after returning from the Operation Annihilation tour in Australia. In a posting at the Static-X message boards Wayne Static said that this time around he is focusing on longer buildups and break downs like in the Wisconsin Death Trip days of the band, however the album still maintains the heaviness that was present on Cannibal. On October 14, 2008 Static-X released their much anticipated live CD/DVD, Cannibal Killers Live. On December 11, 2008 Wayne Static confirmed on the Static-X Message Board the new album's release date and name saying "I had hoped to announce it here first, but my publicist beat me to the punch! The new record is indeed entitled "Cult of Static" and will be released March 17.

The "cult" part of the title is not to be taken in any religious manner, I am referring to and giving respect to the loyalty of all you good people that have supported us through the years. This record is definitely darker than Cannibal and has more synths and loops as well. And this is also the most crushing guitar tone I have ever had. There are 11 songs instead of our usual 12, and they are mostly longer and more epic than ever before." The album debut at #16 on the Billboard 200 chart, the highest a Static-X album has ever been since their second studio album, Machine.

In 2009, the band performed at the Download Festival. It also was the first time the band made an appearance at Rock on the Range.

After finishing their final tour dates in Australia at the end of 2009, Wayne Static announced on the band's official X-Boards that he will now be focusing on his side project Pighammer. In a follow up post he was quoted "It's doubtful I will do anything with Static-X for the next couple years" leading fans to interpret that the band is still together and just on hiatus.

As of 2010, Koichi Fukuda is a member of the industrial metal/ambient band Drugstore Fanatics.

Wayne Static recently revealed that Tony Campos had left the band. He has since joined the metal band Soulfly, taking over from Bobby Burns.Wayne Static has been confirmed for Graspop Metal Meeting 2011 as part of his 'Pighammer' solo project.Wayne Static released his debut solo album Pighammer on October 4, 2011. 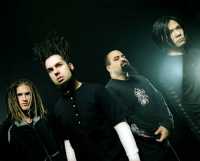