X-Session is one of Long Island's premier cover bands.

Having played over eight hundred shows, X-Session has entertained thousands of fans spanning from the far reaches of eastern Long Island and Manhattan, to ski country in northern New York State, and on to Foxwoods Resort and Casino in Mashantucket, Connecticut.

Consisting of four band members, one can easily mistake their broad sound as being the result of an eight-piece ensemble! Why? The answer is simple. This quartet plays each of their song selections with their own style of abundant vocal harmonies supported by colorful instrumentation.

In published reviews, it has been reported that their versions of The Eagles' - Lyin' Eyes; Crosby Stills and Nash's - Southern Cross; and the Beatles' - Nowhere Man - among many others - are fuller, tighter and just as powerful as the original tracks. In addition to their solid sound, X-Session has played rooms of five hundred or more patrons with inviting enthusiasm and seasoned showmanship.

The members of X-Session also pride themselves on the versatility of playing more intimate settings with a professionally polished, lower volume presentation. Perhaps most notable, the four members of X-Session are dear friends who positively enjoy playing their brand of music. This optimistic energy and sheer love of performing emanates through each musical note and their playful banter with the audience.

X-Session was founded in 1995 by drummer, percussionist and lead singer, Jim Del. On bass guitar, harmonica and vocals is Eddie Profet Jr. Pat Montefusco plays acoustic and lead guitar and provides many lead vocals, while newest member Joe DeJesu joins on guitar and vocals also. Collectively, X-Session boasts eighty years of professional experience, having entertained the likes of Donald Trump in his penthouse on the east side of Manhattan, Alec and Billy Baldwin at the Carol Baldwin Breast Cancer Benefits at the Grand Hyatt Ballroom in Manhattan and - each year annually since 1998 - prominent political and military figures at the U.S.

Army Base at West Point. Additionally, X-Session has shared performance evenings with internationally known artists Kool and the Gang, David Lee Roth, The Marshall Tucker Band, Lil' Kim, Richard Marx, Roberta Flack, Marilyn McCoo and Billy Davis Jr., and The Trampps. The boys have also had the honor of performing the National Anthem, a Capella, at Shea Stadium prior to a Mets game and has done so annually since 2003. Additionally, they are currently employed as the house band at Claudio's Restaurant and Clam Bar in Greenport, New York. X-Session routinely performs wedding ceremonies and receptions, as well as major corporate events. 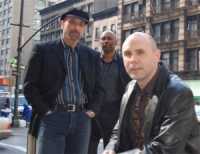