With the rise of gothic metal, dozens of bands have combined crunchy power chord volleys with ethereal vocals and orchestral arrangements, but none have done so as convincingly or with such a keen grasp for symphonic arrangements as Holland's Within Temptation.
Within Temptation formed in Holland in 1996 around the nucleus of singer Sharon den Adel and guitarist / song writer Robert Westerholt.
The band's debut album, 'Enter', enchanted the metal press with its fantastic mix of melody, orchestral elements and epic song-writing suss. A year later the band were invited to play a side stage at the Dynamo Festival - it was only their fifth performance overall - but they proved to be such a hit with the assembled throng that they were invited back the following year to open the main stage! The band toured relentlessly for the next two years, almost without a break.
Then, in 1999 they decided to take a year off to work on the now legendary follow-up album, 'Mother Earth', for new label GUN (Sony BMG). Without a shadow of a doubt, 2003 belonged to Within Temptation. Their sophomore album 'Mother Earth' - a wired amalgam of orchestral theatre and anthemic, metallic riffs - conquered the hearts and souls of the rock community Europe-wide. The singles 'Ice Queen' and 'Mother Earth' both went top 20 in Germany and top 3 in Holland, while the accompanying videos, along with an inspired cover of the Kate Bush classic 'Running Up That Hill', dominated TV screens right across the continent. This album went gold and platinum in Germany, Holland, and Belgium.
The Dutch-based sextet did it all again in 2005 with a new deal with Roadrunner Records and a new album - 'The Silent Force'. Caught between the roughshod guitar board, an 80 piece orchestra, a choir (recorded in Moscow) 'The Silent Force' saw Within Temptation sounding even more powerful, more epic and more sensual than ever before - whether that be the subtle electro edge of lead single 'Stand My Ground', the beautifully arranged 'Memories' or the sheer striking force of Sharon's ethereal vocals on 'Angels'.
'The Silent Force' debuted at Number One in the Dutch album charts and at Number Five in the German album charts. It also went Top Ten in Finland, Spain and Belgium, Top Twenty in Austria and Switzerland and Top Thirty in Greece, Sweden and Norway. A myriad of Gold certifications followed.
In early 2005, with over 400,000 copies of 'The Silent Force' already sold in Europe, Within Temptation was twice awarded the Conamus Music Export prize. They were also privileged to accept the Edison Award for Best National Band (the Dutch equivalent of the US Grammy Awards & the UK Brit Awards) as well as a TMF Award from MTV Benelux for Best Local Rock Band.

They were later signed to Roadrunner Records and in 2007 released the epic "The Heart Of Everything" which brought the band's majestic, emotion-swept music to new heights."We pushed ourselves to make these songs the best that we could," says Westerholt of the new record.
"We wanted to have a more organic feeling and more energy than ever....It still has a big feeling and there's still plenty of classical parts, but I think we did it without losing the power of the band."
With "The Heart of Everything", Within Temptation has never sounded more powerful or alive. The first single "What Have You Done," featuring Keith Caputo of Life of Agony, which see-saws between caustic guitar crunch and gothy, gauzy textures, is the perfect marriage of melodic rock and metal. The equally powerful track "The Howling" showcases Den Adel's trademark haunting vocals and soaring melodies, while the glacial "Frozen," features heartrending vocals and staccato string bursts and "The Cross" which starts like an intro to a film score, segues into a winding, dramatic number that's equal parts Richard Wagner, The Gathering and Kate Bush.
While Within Temptation was more selective about their compositions and less effusive with their classical elements, they experimented as much as ever, adding mandolin to "The Cross," cello to four tracks and working with the Prague Orchestra instead of individual players or synthetic strings.
The band chose the album title The Heart of Everything because the songs address feelings and ideas that exist under the surface and can't be excavated without introspection.
"So often, we live our lives without thinking," Westerholt explains. "We just do things because we're born in a certain environment and people are expecting certain things from you. Sometimes its important to look within yourself and discover what really makes you happy and what's important to you."
In their search for self-discovery, Within Temptation address a variety of subjects, including the futility of war ("Our Solemn Hour"), the strength of unconditional love ("Forgiven") and personal hardships faced by certain bandmembers ("The Cross"). Books inspired some tracks, like "Hand of Sorrow." Others were based on films.
"We wrote ‘The Heart of Everything' after watching ‘Braveheart,' says Westerholt. "And ‘The Truth Beneath the Rose' is based on ‘The Da Vinci Code' and is about the idea that belief is sometimes used to justify sins. On the other hand, it may be more important with belief that it's your own belief and you can stand behind it instead of following the belief other people may want to put upon you.
The Heart of Everything recaptured everything Within Temptation has thrived upon while taking their music to newer, more thrilling places. And in the process, through all the melancholy atmospheres, cinematic riffs and angelic vocals, the band delivers its most pragmatic and proactive message to date. "If you want to make something out of your life, it's in your own hands," Westerholt says. "Life can sometimes be pretty rough and not very easy, but still you have a lot of power within yourself and there's always the possibility to bend things your own way." 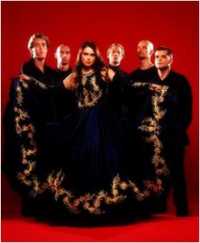