Teddy Wilburn was just barely six years old, Christmas Eve of 1938, when he and brothers, Lester, Leslie and Doyle and sister, Geraldine, stood huddled together on a corner street in Thayer, Missouri, making their first public appearance. A family musical career that has continued ever since.

"POP" Wilburn had ordered their instruments from the Sears Catalog and rehearsed the children for over a year, inviting neighbors from miles around to come to the Wilburn country home about ten miles from Hardy, Arkansas, for back-yard square dances.

Six month school terms at a one room country schoolhouse left the rest of the year, following their street corner debut, to tour neighboring cities and states, working shows on local radio stations with more street corner appearances as well as school auditoriums, churches, movie houses . . . anywhere their Dad, who acted as manager, agent, and public relations representative could gather a crowd.

Roy Acuff was introduced to their talents in Birmingham, Ala., and he returned to Nashville, told officials at the Grand Ole Opry about this singing musical group and arranged an audition. The Wilburn Children became regular cast members of the Grand Ole Opry in the spring of 1940, but due to their young ages and the show's late hours, pressures from a child labor organization proved too much for Opry officials and they were forced to terminate the children's stay after only six months.

Returning to small radio stations and working personal appearances continued until sister Geraldine got married and left the act. The four brothers continued pickin' and singin' and 1948 found them on The Louisiana Hayride in Shreveport, La., where they performed until the 1951 Korean conflict took both Teddy and Doyle into active service in Uncle Sam's Army.

After release from service, both Doyle and Teddy went to work with the Webb Pierce Show and were soon back on stage at the Grand Ole Opry. They joined the Opry as regular members in 1953. Webb secured them a recording contract with Decca Records that became a 22-year relationship. National and non-country recognition came from appearances on television shows like Arthur Godfrey and Dick Clarks's American Bandstand.

Their own syndicated television show for over twelve years introduced such faces as Loretta Lynn, the Osborne Brothers, Crystal Gayle and numerous other country artists to nationwide television viewers. Classic Wilburn Brothers recordings; "Trouble's Back In Town," "Roll Muddy River," "It's Another World," "Someone Before Me" and "Arkansas" are evergreen. On Oct. 16, 1982, The Wilburn Brothers' career ended with Doyles' death by cancer. "It was like a 45-year marriage ended," Teddy said. "There was a lot of adjusting to do."

Brothers Virgil Doyle Wilburn (b. 7 July 1930, Hardy, Arkansas, USA, d. 16 October 1982) and Thurman Theodore 'Teddy' Wilburn (b. 30 November 1931, Hardy, Arkansas, USA). They started their careers as children singing with their siblings as the Wilburn Family. This featured two elder brothers, Lester (b. 19 May 1924), Leslie (b. 13 October 1925) and sister Vinita Geraldine (b. 5 June 1927), all born in Hardy, Arkansas. Their father, Benjamin Wilburn, a disabled World War I veteran, whose ill health prevented him doing normal work, thought that a career for his children in entertainment might help the family budget. He bought a mandolin, guitar and fiddle from the Sears, Roebuck catalogue and in 1937, after his tuition, the Family were singing on the streets of Thayer, 18 miles over the state line in Missouri. They went on to play local radio stations and in 1940, after a reference from Roy Acuff, who saw them singing at Birmingham, Alabama, they were invited to join the Grand Ole Opry. They immediately became very popular and attracted large amounts of mail but after six months, beset with problems concerning child labour laws, the Opry management asked them to leave. They returned home and continued to entertain, although the onset of World War II affected their careers. Between 1948 and 1951, the Wilburn Family worked on KWKH Shreveport, where the four brothers regularly appeared on the Louisiana Hayride (Geraldine left the group in 1948 to marry). In 1951, because of the Korean War, both Teddy and Doyle were drafted for US Army service. In 1953, after discharge, they began to work as a duo, touring and working with several major acts, including Webb Pierce, Faron Young and Ernest Tubb, and they played on the Opry, becoming full cast members in 1956. They recorded for Decca Records, first charting in 1955 with 'I Wanna Wanna Wanna', but the following year they had Top 10 country hits with 'I'm So In Love With You' and 'Go Away With Me'. Further chart successes followed, including two Top 10 duets with Ernest Tubb ('Hey, Mr Bluebird' and 'Mister Love'). In the late 50s, they joined with Leslie and Lester to found the publishing company Sure-Fire Music, which handled their own and other artists' songs. During the 60s, they toured extensively and frequently made the country charts with their recordings. Their Top 5 hits included 'Trouble's Back In Town' (1962), 'Roll Muddy River' (1963), 'It's Another World' (1965) and 'Hurt Her Once For Me' (1967). They hosted their own network television show, on which they featured the young Loretta Lynn (they also obtained a Decca recording contract for her), and also appeared in a series on Australian television. They extended their business interests to include Wil-Helm Talent, which became one of Nashville's top booking agencies and handled many of the major stars. Although they had no chart successes after 'Arkansas' in 1972, they maintained their popularity and still appeared on the Opry throughout the 70s. Doyle Wilburn died in Nashville in 1982 as the result of cancer. Teddy maintained the family tradition and continued to appear on the Opry, often accompanied by brothers Lester and Leslie.

The following is from www.tennessean.com

Teddy of The Wilburn Brothers dies at 71

Teddy Wilburn, half of a country duo that excelled in both music and the music business from the 1950s through the 1970s, died yesterday from congestive heart failure after a battle with a rare form of Parkinson's disease at Southern Hills Medical Center. He was less than a week shy of his 72nd birthday.

The Wilburn Brothers, Teddy and Doyle, sang close harmony on such hits as Hurt Her Once for Me, and wrote songs such as Somebody's Back in Town and Let Me Be The First To Know.

They also founded publishing and booking companies that aided the careers of Loretta Lynn, Jean Shepard, Sonny James, the Osborne Brothers and others. Doyle died in 1982.

Because Mr. Wilburn's lead singing and his brother's tenor harmony evoked the style of acts such as the Monroe Brothers and the Louvin Brothers, ''Many people deemed the Wilburn Brothers to be the last great brother duet act in country music,'' WSM disc jockey and country music historian Eddie Stubbs said yesterday.

Don Helms, the former Hank Williams steel guitar player who backed the Wilburns as an instrumentalist and business partner, said, ''I spent 10 of the best years of my life with them.''

Helms described Mr. Wilburn as a clean-living, articulate gentleman: ''I can truthfully say they were the classiest act — together and individually — that I've ever worked with.''

Thurman Theodore Wilburn was born Nov. 30, 1931, in the Ozark Mountain community of Hardy, Ark. He and Doyle were merely 6 and 5 years old, respectively, when their father, Benjamin, organized them and older sons Lester and Leslie and daughter Geraldine into The Wilburn Family band.

The children first performed outdoors on Christmas Eve 1937 in nearby Thayer, Mo.

The band earned the admiration of Roy Acuff, who invited the Wilburn Family to play regularly on the Grand Ole Opry in 1940 or '41. Child labor laws prevented full membership, so after six months of weekly shows the band returned home.

After World War II, the group returned to local stages without Geraldine. They met and helped future Country Music Hall of Famer Webb Pierce, then a little-known singer, land a key slot on the Louisiana Hayride barn dance in Shreveport, La.

Mr. Wilburn and his brother Doyle were drafted during the Korean War. By the time they were discharged in 1953, Pierce was a major Opry star, and he returned the favor, taking the brothers, now a duo, on tour and helping them land a deal with Decca Records.

The Wilburns' first hit record was a collaboration with Pierce called Sparkling Brown Eyes, which spent 18 weeks on the charts, peaking at No. 4, in June 1954. They were uncredited backing vocalists on Pierce's biggest single, In the Jailhouse Now, Stubbs said. They also toured with Faron Young and Ernest Tubb and soon were asked to become Opry members.

As businessmen, the Wilburns proved arguably even more formidable. They launched Sure-Fire, a music publishing house, and the Wil-Helm Talent Agency, a partnership with Helms.

The Wilburns added Lynn to their road show and managed her for a decade. Doyle helped get Lynn out of an early record contract and on to prestigious Decca, where she launched her Hall of Fame career.

Between 1963 and 1974, the Wilburn Brothers were hosts of one of country music's first color syndicated TV shows, exposing artists they worked with, including Lynn and the Osbornes. Other artists who appeared on The Wilburn Brothers Show included The Oak Ridge Boys, Tammy Wynette, Bill Monroe, Tex Ritter and Barbara Mandrell.

In 1967 the Wilburns were named Duet of the Year in the Music City News Awards. The Country Music Association nominated them for the Vocal Group of the Year award in 1972.

Mr. Wilburn studied acting in Hollywood for a time and continued to perform on the Opry into the 1990s. He was a member of the cast at the time of his death.

Funeral services will be open to the public at the Ryman Auditorium tomorrow at 1 p.m., with visitation beginning at noon. 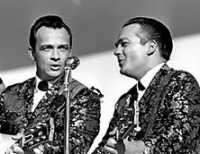