FROM the moment Whitney Houston first opened her mouth to sing, it was obvious that she was bound for greatness. As the daughter of Cissy Houston, a successful rhythm-and-blues backup singer, and a cousin of the even more renowned singer Dionne Warwick, young Whitney grew up steeped in music. She dutifully sang in the New Hope Baptist Junior Choir, aspiring to nothing higher than being a backup performer like her mother. But by the time she was 11, it was readily apparent that hanging in the background wasn't in the cards for her.

When Whitney took center stage one evening to sing a solo, the power of her performance moved many in the congregation to tears. Despite her shrinking-violet tendencies, Houston's combination of exceptional beauty and her stunning, church-inflected soprano propelled her into the spotlight.

Houston first put her talent to use professionally as a teenager by singing backup for Chaka Khan and Lou Rawls. A sleek and exotic-looking young woman, Houston dabbled successfully in teen modeling, gracing the covers of such magazines as Seventeen and Glamour. At the same time, she studied acting and dancing, appeared in television commercials and sitcoms, and made occasional singing dates. But these diversions were mere warm-up exercises for the singing career she was destined for. Adequate preparation for her inevitable rise to global pop superstardom was the ultimate concern of Houston and her family, and several weeks after her 18th birthday she signed a management contract with Gene Harvey. Under his guidance, Houston continued her modeling career, took more acting and dancing classes, and worked on her voice.

After a couple of years spent developing her vocal virtuosity and making industry contacts, Houston was ready for the big time. In 1985, she signed with Arista Records, because its president, Clive Davis, had a proven track record of picking hits for his singers, not to mention a reputation for letting artists take their time to mature. A period of two years passed before her debut LP was released, and in the interim, Houston increased her profile by performing for industry bigwigs, appearing on television shows, and helping her advisers choose songs for her album. Applying a fluid, soaring technique to R&B, soul, and disco arrangements, Houston's eponymous debut spun off three No. 1 singles—"Saving All My Love for You," "How Will I Know," and "The Greatest Love of All"—and sold more than 13 million copies to become the best-selling debut of all time by a female solo artist.

(Houston's multiplatinum titleholder was toppled by Alanis Morissette's Jagged Little Pill in 1996.) "Saving All My Love for You" earned Houston her first Grammy award (she has won a total of five thus far), and she spent the next two years touring in support of the album.

More record-setting success was to come with Houston's 1987 follow-up effort, Whitney. Not only was it the first album by a female to enter the charts at No. 1, but she became the first artist in history to score seven consecutive No. 1 hits, surpassing milestones set by the Beatles and the Bee Gees. Houston's acting and dancing lessons paid off in her dynamic MTV videos, and her galvanizing rendition of the "Star Spangled Banner" at the 1990 Super Bowl. Houston promoted Whitney by heading back out on tour, and in 1990, she released I'm Your Baby Tonight, a more danceable, technically impressive effort.

Five years of constant touring had begun to take their toll, however, and Houston decided to take some time off to acquaint herself with the palatial, $11 million Mendham, N.J., mansion she had purchased. Houston's down time allowed her a chance to get her personal life in order. After being romantically linked with Jermaine Jackson, Eddie Murphy, and quarterback Randall Cunningham, Houston took up with bad-boy rhythm-and-blues artist Bobby Brown.

In 1992, the Prom Queen of Soul and the bad-ass captain of the glee club were married before 800 well-wishers. Many in the crowd couldn't help but be skeptical. Brown brought a certain amount of baggage into the marriage—like three out-of-wedlock children by two women, for starters—but despite all the couple's highly publicized contretemps since the wedding day, Houston continues to profess her love for Brown. She once offered this vehement assessment of her husband: "I've got a good man. He takes care of me. I don't have to be scared of anything because I know he will kick every ass…disrespect him and you've got a problem."

Brown's boozing and womanizing ways and sporadic run-ins with the law may have made Houston an occasional object of pity and criticism in some observers' eyes, but others argue that she is the one who is hard to put up with. She has earned a reputation as a prima donna for her frequent episodes of tardiness—in one unpleasantly conspicuous instance, she arrived two hours late to a White House dinner honoring Nelson Mandela, at which she was the featured performer (she breezed in with the excuse, "I just got off tour," even though her final appearance had been four days previously). During an Anaheim, Calif., concert appearance in August 1994, Houston tearfully requested that the spotlight be turned away from her and onto audience members Sidney and Justin Simpson, the children of O.J. and Nicole Brown Simpson. Considering the fact that Nicole had been murdered just two months before, the request seemed bizarre, and singularly mortifying.

Since 1990, Houston has managed to maintain her easily won eminence, despite the fact that she has greatly curtailed her output. Not that she hasn't been busy: navigating through some perilous straits in her personal life, the pop diva managed to bear a daughter, Bobbi Kristina, and conquer the world of film. Her first feature, The Bodyguard, banked more than $400 million worldwide, and boasted the most successful soundtrack ever released, with sales in excess of 33 million units, due largely to Houston's soaring interpretation of the Dolly Parton classic "I Will Always Love You." In 1995, Houston rounded out the cast of Waiting To Exhale, a film about successful black women looking for good men. Exhale became something of a phenomenon, as did its Whitney-heavy soundtrack. Her third and most recent film, The Preacher's Wife, didn't fare quite as spectacularly at the box office, but the soundtrack for the film presented her with an opportunity to get back in touch with her gospel roots.

Houston is known for her charitable bent, making significant contributions to the United Negro College Fund, the Children's Diabetes Fund, St. Jude's Children's Hospital, and several AIDS-related organizations, and she established the Whitney Houston Foundation for Children, Inc., a nonprofit organization whose work assists homeless children and children with cancer and AIDS.

One noncharitable appearance the diva was supposed to make was at "Blessing '97" on Nov. 29, 1997. The event, billed as the largest mass wedding ever, was to earn the diva a cool $1 million for 45 minutes onstage. But when the press seized upon the pending appearance for the Moonies (the controversial Unification Church started by Reverend Sun Myung Moon and his wife, Hak Ja Han Moon), Houston released a statement declaring that she didn't know "Blessing '97" was a Moonie affair. Two hours before the wedding began, she backed out citing "illness," leaving both the Moonies and her own band, which had already set up, in the lurch.

While rumors still cloud the rocky Bobby Brown union, the pairing persists, despite ongoing legal troubles. In June 1998, various tabloids reported that the two were on the verge of officially separating, a month shy of their sixth anniversary. They were proved wrong when the two singers celebrated that occasion, their marriage still intact several months later, and apparently remaining that way.

In August, news of a significant duet in divadom was made public: Whitney Houston and Mariah Carey were in the studio together. The strong-lunged, octave-jumping singers recorded "When You Believe," the theme song from the animated DreamWorks pic The Prince of Egypt, which tells the story of Moses. Kenneth "Babyface" Edmonds was on hand to referee, er, produce the single. Dispelling rumors of competitiveness, the Houston and Carey appeared together at the MTV Video Music Awards in September—wearing the same dress no less. After some canned banter ("Nice dress," Carey offered. "Yeah, you look pretty good, too," Houston answered) the women presented Will Smith with the Best Male Video Award.

The The Prince of Egypt soundtrack landed in stores Nov. 17, the same day as Houston's new solo album, My Love Is Your Love. Guests on her first full-length studio recording in eight years include Missy Elliott, Faith Evans, and Wyclef Jean. The disc also sports a special hidden track, "My Love," produced by Lauryn Hill. As for "When You Believe," the track appears on the movie soundtrack, Houston's album, and Carey's new hits collection, #1's—all released the same day. Octave overload? Hardly. Retailers the world over will undoubtedly make plenty of room on store shelves for the dueling—and dueting—divas. 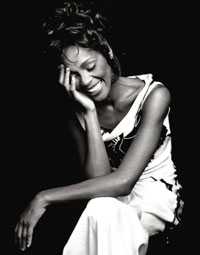