The day after his high school graduation, Rob Cummings (later to become known as Rob Straker, and finally, Rob Zombie) fled his hometown of Haverhill, MA, for New York City. There he supported himself by doing various odd jobs, including layouts for porn magazines with girlfriend Shauna Reynolds (who would become Sean Yseult), working as a bike messenger, and as a production assistant on PeeWee's Playhouse. Shauna, originally from South Carolina, had a degree in art design. She and Rob also worked together doing art design for a series of magazines.
In 1985, the two of them formed White Zombie. Rob, a fan of old horror films, named the band after the 1933 movie White Zombie, starring Bela Lugosi. The band's lineup was Rob on vocals, Tom Guay on guitar, and Ivan de Prume on drums. Having no previous experience, Sean was simply handed a bass, and White Zombie had a bassist.

Tom Guay was later replaced by John Ricci. In 1989, Ricci quit the band, forcing Rob to look for a new guitarist. While browsing in a New York City comic book store, he mentioned to the clerk that he was without a guitarist. The clerk knew Jay Noel Yuenger, and gave Rob his phone number. The new guitarist was found.

One final change was to take place among the membership of White Zombie. During the La Sexorcisto tour (which also saw the breakup of Rob and Sean), Ivan de Prume was fired. Refusing to talk about it, Rob simply says, Ivan "was put into an escape pod and jettisoned into outer space." The next drummer to step in was Phil Beurstatte, known as Philo. He lasted less than a year. "Phil never really fit in with what White Zombie is all about," Rob explained. The next man at the skins was (and is) John Tempesta, formerly of Testament. "Unless he's an axe murderer and we don't know about it, I think he's definitely the one," said J. 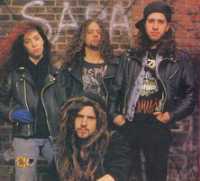