Westlifes original members hail from Co. Sligo in Ireland.Out of those original members only three remain;Shane Filan, Kian Egan and Mark Feehily.Bryan McFadden and Nicky Byrne joined the group when Louis Walsh showed interest in the band, he then introduced ex-Boyzone member Ronan Keating to the band and the pair now co-manage the group.

The first single to be released was "Swear It Again" which went in straight to number one in the U.K. and in Ireland, it then went to tne top spot in numorous other countries.They followed it with "If I Let You Go" which also went to number one in those countries.They have released nine singles altogether off their previous two albums,"Westlife" and "Coast To Coast". Their next single is called "Queen Of My Heart" and it is on their upcoming album "World Of Our Own". They have been entered in the "Guinness Book Of Records" for having their first seven singles go straight to number one in the U.K. and for having five number one singles in Ireland.

Their tour earlier this year was so successful that tickets are already for sale for their next one in 2002, which is in big demand.Westlife have tried, and unfortunatly failed, in conquering America but the lads have vowed to try again and their fans are certain that the American public will realise, sooner or later, how great Westlife really are. 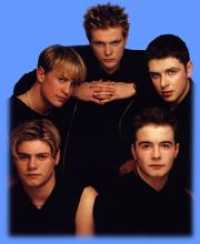