We Are Scientists are vocalist-guitarist Keith Murray, bassist Chris Cain and drummer Michael Tapper. They formed in Berkeley, CA, shortly before moving to New York in the summer of 2001, taking their name from a conversation with a man at the U-Haul company where they hired a truck. After some inappropriate venue choices for their unique songs, they hit their stride with spontaneous performances. “We’re more into having an engaging, energetic live show than delivering something that’s simply the album played live. When things go ‘wrong’- when equipment fails or the drums fall over or I slice my hand open- we love it,” says Keith.

After their five-song demo caused a music industry stampede Stateside and a triumphant performance at this year’s South By Southwest turned up the heat, the band signed to Virgin Music. They celebrated with “a lot of smug looks all around,” says Keith. “That was the extent of our celebrations. And smoking invisible cigars.” This was followed by the recent release of their acclaimed debut single, Nobody Move, Nobody Get Hurt’, which was added to MTV2’s B-list. 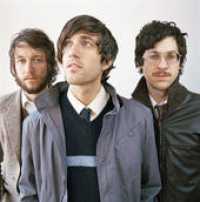