ALTHOUGH dancehall Reggae deejays (rappers) must be lyrically tough, unleashing rapid-fire guns in the ghetto rhymes and inflated sexual boastings, dancehall singers can attain great popularity sensitively cooing about a new found love, melodically lamenting a love gone wrong and emotionally conveying other oh-so tender concerns. The sensual, honeyed vocals of Wayne Wonder have made him a consistent hit maker since the late '80s. In 2002, Wayne earned the first #1 hit of his career pledging a lifetime of devotion on the sweetly romantic hit "No Letting Go". "This is the biggest hit of my lifetime," Wayne exclaims. "The song is #1 in Jamaica, #1 in New York. WBLS is playing it, Kiss is playing it, I hear Hot 97 playing it. I'm grateful and I feel blessed."
Born Von Wayne Charles on July 26, 1972 in Buff Bay, Portland, Wayne's initial singing inspiration came from attending Sunday school, where singing was compulsory, and from his mother who sang in church. As a child Wayne and his family moved all over eastern Kingston, living in areas such as Dunkirk, Franklin Town and Rae Town, home of the weekly Sunday night Reggae/R&B oldies street dance. The exposure to vintage 45's at these dances would provide Wayne with a richer, more soulful vocal approach to a Reggae rhythm track than many of his contemporaries. It was at secondary school where Wayne's thoughtfulness and philosophical nature led to the acquisition of the nickname "Wonder"; young Wayne sang at school, at home, at church and for his friends and wherever he sang, he was encouraged to pursue his craft professionally.

The first producer Wayne recorded for was the legendary creator of dub, the late King Tubby. Wayne voiced three original songs for Tubby, but the one that caught the public's attention was his cover version of British heartthrob Rick Astley's "Never Gonna Give You Up". In 1988, Wayne was devastated by the death of Tubby who was among the most significant influences in his early career. Wayne then linked up with producer Lloyd Dennis voicing the hit "It's Over Now" on the popular "Cover Me" rhythm (titled after the hit by Ninja Man and Tinga Stewart) for Dennis' Pickout label. "That was actually the first song that start to play, like I could go to the dance and look forward to hearing it," Wayne recalls, "so my inspiration grew more from there." Wayne also recorded his debut album "No More Chance" on the Pickout label. "No More Chance" contained seven original tracks and several obligatory cover versions, reflecting Jamaican producers' preference for recording singers doing American R&B hits. "When I first started out, I got so frustrated, because you carry original material to the studio and they act like they don't even want to hear it," Wayne explains. "They don't accept it. They want you to sing over something that everybody already know. Them don't spend time to hear your creativity or what you try to originate."

Around 1989, Wayne began collaborating with h his childhood friend Dave Kelly. At the time, Kelly was an engineer for Donovan Germaine's Penthouse Records, the label synonymous with Dancehall Reggae hits of the late 80s/early 90s. Together Wayne and Dave created a steady stream of successful Penthouse tunes including "I'm Only Human," "Baby You and I" and "Saddest Day" (which Wayne re-recorded in combination with Foxy Brown on her 2001 Def Jam Records "Broken Silence" CD). Wayne became well known for his 1991 cover version of the late Jamaican singer Delroy Wilson's "I Don't Know Why" re-titled "Movie Star." The same song in combination with Buju Banton (whom Wayne brought to Penthouse Records) "Bona Fide Love" proved to be a huge success as well, remaining a heavily requested tune even today.

Wayne achieved several hits with Penthouse covering the work of American artists including Tracy Chapman's "Fast Car", PM Dawn's "Die Without You" and En Vogue's "Hold On" but in 1993 he pledged he would only record original material. "From that time, I haven't covered a song, everything is all original music," declares Wayne who has co-written hits for other artists including Buju Banton's "Deportees" and "Murderer". "I don't feel proud if I cannot sing my songs, it's a different feel that it gives you than singing someone else's song. How can I be touring and singing other peoples songs? I supposed to be touring and singing my songs!"

Wayne and Dave Kelly continued their successful musical relationship when Kelly founded his own Madhouse and Xtra Large labels. Wayne recorded many hits for Madhouse spanning the mid to late 90's, including "Joyride," "Bashment Gal," and "Keep Them Coming." Wayne introduced an extra dimension with "Let Your Conscience Set You Free" recorded in combination with his alter ego, deejay Surprize. "I have a lot of tracks on the road Wayne Wonder featuring Surprize. Really, I'm the deejay as well as the singer, that is the surprise. My creative juices get crazy on me so I apply them in different ways." Surprize was also featured on several tracks of Wayne's 2001 release "Schizophrenic" as was Wayne's underground group Entourage, featuring his deejay protege Showki Ru (pronounced sho-kee roo).

Wayne launched his own record label Singso in 2000 and has released singles by several artists including Baby Cham, Alley Cat, Frankie Sly, and Mr. Easy. Steve "Lenky" Marsden, the multitalented musician and producer, whose hypnotic Diwali rhythm track supports Wayne's sweet serenading on the chart topping radio hit "No Letting Go" is one of the featured producers on the album, along with heavy hitters Tony Kelly and Sly Dunbar.

Wayne has been working tirelessly in the studio completing tracks for his upcoming album for VP Records "No Holding Back" due February 2003. He has done much of the pre-production work in his New York home studio, as well as recording tracks in Jamaica. Wayne wrote or co- wrote all of the songs on "No Holding Back" and the album will certainly adhere to the same superlative vocal and songwriting standards his fans have come to expect from him over the years.

"I just want to do good songs," Wayne concludes. "I'm keeping the mainstream recognition (from "No Letting Go") in mind but adding my creative flow to it because I want people to know that Wayne Wonder is not limited. Once I finish the album, I'll hit the road and tour. I got a good band together and I really feel pleased. I can go out there now and really represent myself." 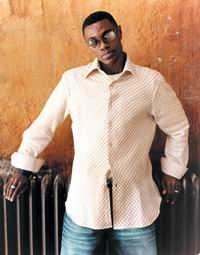