Seattle's Waxwing have successfully combined a myriad of influences into a distinctive sound, blending elements of punk, folk, rock, and at times even country. With two full-lengths, a collection of 7"s, and an EP under their belt, they have emerged as one of the American Underground's most interesting and dynamic young bands around the turn of the century.

Following the 1996 breakup of their band Lying on Loot (which included Red Stars Theory violinist Seth Warren and Bugs in Amber guitarist Sonny Votolato), singer/guitarist Rocky Votolato and drummer Rudy Gajadhar began playing with bassist Andrew Hartley under the name Waxwing. Rocky's younger brother Cody soon joined the band on second guitar, and the band recorded their debut 7" for Henry's Finest Recordings. In 1999, Second Nature Recordings released their first full-length, entitled For Madmen Only. Blending the straight-ahead rock approach and emotional honesty of the Replacements with the moodiness of Black Sabbath, the record was a critical success and earned the band a solid local following.

When One For the Ride was released in late 2000, Waxwing's profile had grown substantially. Rocky had released several well-received solo records, while Cody's other band, The Blood Brothers, had a strong following of their own. One For the Ride found the band exploring more diverse dynamics in their songs, exploring new styles of music (some moments wouldn't be out of place on a Calexico album), and focusing on a wider dynamic range. The band toured the Midwest and West Coast with The Casket Lottery in support of this album and returned home to Seattle to work on new songs and allow the members time to focus on other projects.

The band has just completed work on their eagerly awaited 3rd Full Length, Nobody Can Take What Everybody Owns, due out on Second Nature Recordings late summer 2002. This record definitely takes them back to their roots with a much faster, more aggressive and upbeat sound than their last. Stripped down and back to the basics, the greatest part of this record it's pure raw energy. They are doing something here that can only be compared to something being done by Jawbreaker in their early years. Waxwing is now and has always been about the struggle to communicate. Lyricist Rocky Votolato concentrates on a wide variety of issues from Alienation, Great Hope, and Deep Seeded Psychosis -- to Adultery, Domestic Violence, and Family Struggles. 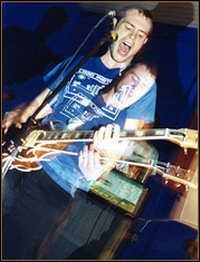