A history of blood, guts and extreme rock n' roll

There have been more rock bands to come down the proverbial pike then anyone would care to count - each boasting that they are unique, different and in some cases better than all the rest. There are only a select few who proudly bear the tag "shock rock" as the key to what makes them truly different and interesting. They are those artists who take the music, the live show and the life style beyond the extreme simply because they can. And though many have tried their hand at the "art of sick" few have mastered it and only one has coined it as their own, leading the way for some of today's top acts. That band is W.A.S.P. They prove that the spirit of sonic, in your face, sleazy rock 'n' roll is more than just alive and well. It's spitting blood and taking names.

Founded in 1982 be X-rated frontman and Staten Island native Blackie Lawless (formerly of New York Dolls and Killer Cain). Having grown up in religious surrounding with a deacon for a grandfather and a preacher for an uncle it was pretty much in the cards that Blackie would rebel against his background. But no one could have predicted just how far he would go.

In the late '70's, Blackie set out to gather some musicians together to help him record some demos after a short stint punk band, Sister which was best known for chewing worms on-stage and for being the first LA outfit to adopt a pentagram as their symbol (this was to become almost standard for West Coast acts in the mid to late 80's). Finding undeniable chemistry with the troupe he had assembled, which consisted of Lawless (lead vox and bass), guitarist Randy Piper (also from Sister) guitarist Chris Holmes (who Blackie recruited after spotting him posing nude in the "For Ladies" section of Hustler) and drummer Tony Richards, the four set out to play gigs around LA. By 1983, they had done an excellent (and quite unrepentant) job developing a reputation for themselves as the most outrageous on this or any planet.

Just one year later, W.A.S.P. newly signed to Capitol Records, released their self-titled debut, which blasted on to the charts and shook the very foundation of the music biz. Combining hard-edged guitar work with pop laden rhythm, the band created an overall sound of heavy yet catchy music while lyrically dealing with the obscene, disturbing and truly scary. What was to have been the lead track, "Animal [F*** Like A Beast]", was dropped from the record by Capitol due to its controversial nature, however it was later released through The Music for Nations label and sold 400,000 units. This track may stand out as one of the most notorious of the rock 'n' roll era, a caustic celebration of all things primal and evidence of this band's indeed potent chemistry.

Replacing Tony Richards with Steppenwolf's Steve Riley, the band embarked on their first world tour only to meet with extreme opposition from all corners. With Blackie's stage antics that ranged from "Meat Grinder" where he would throw live rats into a meat grinder, crank the handle, pull out hamburger from underneath and fling it and other raw meat into the crowd, "The Rack" where he would simulate slitting the throat of a beautiful woman trapped in a large wooden case, "Shoot From the Hip" a codpiece he wore that shot sparks, drinking blood from a skull and more, W.A.S.P drew the attention of the parents Resource Music Committee. At the 1985 Senate Commerce Committee Hearings, W.A.S.P. became a prime example of all that is obscene in rock, illustrated with a photo of Lawless posed with a chain saw jutting none-too-subtly between his legs. While history shows that many tour dates scheduled around the world throughout their career, eventually had to be cancelled as a result of local civic groups bringing pressure to bear on promoters as to the kind of acts they were inviting to their towns, the resulting media coverage boosted the band's notoriety especially with teen's all too ready to rebel against their parents. The media frenzy also served to boost album sales.

Several line-up changes and five album later (totalling over 4 million sold), it would seem that the W.A.S.P. days were winding down. In 1993, sounding the end of an era, Blackie announced that the band would disband and that he would begin pursuing a solo career. Still Not Black enough (Castle Records) was released in 1996 (actually under the W.A.S.P. name). It was only soon thereafter at England's Donnington Festival, that Blackie and Holmes announced via the enormous video screen their plans for reuniting for a new album. "We're going to make what we used to do look like f***ing Ghandi!" claimed Lawless.

W.A.S.P went on to release K.F.D. (Kill f*** Die) also for Castle Record in 1997, solidifying their place as the kings of shock rock. But beyond the antics, the controversy and the strong look of the group - "futuristic primitive" in catwalk jargon - there was always danger, particularly early on, of outside observers losing sight of the strength of music, the substance behind the show. Yet lack of substance was something Lawless could never be accused of!

Throughout their storied career, W.A.S.P. have never been a band that's been afraid to take risks. Their early recordings, like their self-titled debut and 'The Last Command', ignited the war over censorship and album stickering while the politically charged 'Headless Children' and the conceptual 'Crimson Idol' revealed that behind all the controversy was a rock 'n' roll band of substance. W.A.S.P.'s 1997 release 'KFD' was the band's darkest effort and the world tour supporting 'KFD' was considered downright blasphemous by some.

The May 1999 release of 'HELLDORADO' was an unabashed return to W.A.S.P.'s early sound of sex, blood, and rock 'n' roll. No fancy frills, no distractions; 'HELLDORADO' is rock 'n' roll the way it was meant to be - hard!

"You know when you're walking down the street and you see an old girlfriend, and she's looking pretty good, and you're like, 'Hey, why ain't I f***ing you anymore?'" asks W.A.S.P. founder and mainstay, Blackie Lawless."You know what I mean? You miss it. When we did 'Double Live Assassins', it re-introduced us to the sound and style of our first two albums. Now I'm kinda like 'How did we get away from this style, this attitude?'"

"The mood that you're in when you make a record is reflective of who you are at that time. When you look at how dark 'KFD' was and then you look at the frame of mind Chris and I were in when we first got back together in late'95, there was like a shroud of hostility around us. By the time we did the live album, we didn't feel like that anymore. Once we got the whole 'KFD' thing out of our systems it was like, 'OK we've done that, now what do we feel like doing?'"

"I don't like making records back to back that sound the same," explains Blackie. "Because of that I'm hard to pin down and unpredictable. I'm sure that has hurt me but I've been lucky enough to sell enough records to keep me floating. I've got a dedicated fan base that's enabled me to keep the flexibility to experiment. Historically W.A.S.P. have always made records that reflect what we were thinking at the time."

"When a band starts out they take the approach that they're not going to do anything in the studio that they can't do live. After a band has an album or two under their belts, a producer will suggest, 'Let's do this and let's do that.' Eventually most bands will give in to the idea of what you can do in the studio versus what you can do live. The logic goes from 'No, we can't do that live so we don't want to do it all the way' to 'Okay, let's do this for the record and then we'll figure out what to do live later. By that direction, it puts you in a space where the writing becomes less technical and the songs have a characteristic all their own."

Blackie may have gotten into the music business for one simple reason ("…to get my dick sucked"), but once the plunge had been taken he stoically set about pursing a vision that had nothing to do with preaching or pontificating, and everything to do with entertaining an audience in different ways and on a multitude of different levels. He led W.A.S.P to continuously pierce through the heart of hard rock music to a metallic sphere where few willingly go, puncturing an otherwise listless and dull surface. For light to exist there must be darkness… 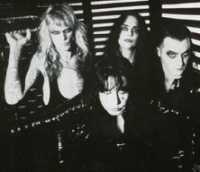