Wallis Bird (born 29 January 1982, County Meath, Republic of Ireland) is an Irish musician. She lives and works in London.

The first time Bird came into touch with music, she was six months old and received her first guitar from her father. Born left-handed, after losing 5 fingers in a lawnmower accident (and having four sewn back on again) on her left hand, she became used to playing a right-handed guitar upside-down, which contributes to her unconventional style of playing. The Irish Time wrote: “The sheer visceral energy could kick-start an entire economy…”

After school Bird moved to the Irish capital of Dublin to study songwriting at Ballyfermot Rock School. It was here that she met fellow band member Aoife O'Sullivan. During that time she kept on playing in small clubs or pubs as well as on major festivals. She moved to Germany in 2005. Prolonging her Germany trip she met her management Karakter Worldwide and other musicians and formed a new supporting band, including brothers Christian and Michael Vinne. After first tourings Berlin, London, Dublin, Cork, Stuttgart, Frankfurt and Mannheim she decided to stay in Mannheim, where she lived for a year and a half.[citation needed] In 2006 Bird moved to London, where she currently lives. In 2008 the band was joined by Irish/Belgium musician Aidan.

Bird is often compared to famous singer-songwriters like Ani DiFranco, Fiona Apple or the young Janis Joplin. In her songs she fuses elements of traditional folk music, blues and funk with an energetic handmade rock sound. Her exceptional voice allows for an already huge repertoire from soft folk ballads to rousing power songs.

Accompanied by her band colleagues, the brothers Christian and Michael Vinne and Aoife O'Sullivan, she frequently tours throughout Europe. In April 2006 her debut EP "Branches Untangle" was independently released both Germany by her own label "Bird Records".

In October 2006 Bird signed a worldwide recording contract with "Island Records Group UK". The Moodsets EP was released for download and on vinyl on 30 July 2007 with her debut album Spoons following on 18 September 2007 in Germany. Her song "Counting to Sleep" was chosen by iTunes as their Single of the Week and the digital release of her album Spoons subsequently rocketed into the Top 10 UK Album Download Charts. In the UK, her single, "Blossoms in the Street" was released on 15 October 2007, with the physical release of Spoons following 22 October 2007.

In February 2008, Bird toured the UK as support act for soul star Gabrielle and later that year with Billy Bragg.

In 2009 (Ireland/UK) and 2010 (Rest Of Europe), Bird released her second album "New Boots", which entered the Irish album charts on No. 11, played over 80 headlining shows through Europe and supported over 20 shows in Europe of critical acclaimed Rodrigo y Gabriella. During the festivalsummer she played over 15 festivals in Europe, including Montreux Jazz Festival, Oxegen Festival, Frequency Festival, Rock En Seine, Lowlands, Pukkelpop.

In January 2011, Bird toured with Anaïs Mitchell's performance of her critically acclaimed album Hadestown, providing opening support whilst also taking part in the main production of the show.

In november 2011 Bird released a special limited edition sole accoustic album (limited to 1000 copies) called “The Mistakes are Intentional”. Bird recorded the solo versions in her home in London during the summer of 2011. The CD is packaged in a wallet which has been hand-stitched by Bird herself. Bird made this album in anticipation of the release of her new third full-length album "Wallis Bird" that will be released in march 2012.

In October 2008, Bird recorded a cover of Depeche Mode's 1981 hit "Just Can't Get Enough" for The Sun newspaper's advertisement campaign. Following repeated requests from viewers, the song was digitally released in Europe as a double A-side single, together with Bird's own song "The Sunshine Song". In March 2010, Bird appeared on GOTV to present her favorite music videos and musical influences.[1] Artists who have influenced Wallis are Björk, Queens of the Stone Age, Regina Spektor, Feist and Vampire Weekend. 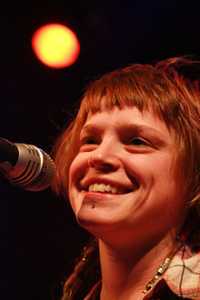