When the So Icey brand name comes to mind, off top you probably think of Gucci Mane, followed by newcomer OJ da Juiceman. Now there is another So Icey offspring growing in the South - Waka Flocka Flame. Taken under Gucci's wing to learn the ropes, Waka surprised himself with how easily he took to the sport of rapping.

"Gucci showed me how to rap. He said, 'Bro, dis shit easy.' I just listened to what my boy said, and this shit is easy. I been rappin' for like a year now.”

Though he claims it's been easy, Waka may not realize how difficult it is for the average rapper to collect a fanbase his size, especially in such a short amount of time. With the release of his first mixtape earlier this year, the 23-year-old quickly found out his forte was with the female audience.

"I've got more girl fans than anything,” he claims. "I've got a song called 'Down Ass Girl' and I was just playin' [when I made that song] but they liked that a lot. That's like the #1 song on the mixtape.”

The entire mixtape was recorded in a week, and during that week Waka created several hits: "Down Ass Girl,” "Dreads and Golds,” and his current club record, "O Let's Do It.” The latter song has increased his scope of listeners and made him one to follow in the streets of Atlanta.

Self-described as a mix between Eazy E, Lil Jon, and Gucci Mane, Waka's goal with music is to get people crunk and make girls dance. Sounds simple enough, but it's a far different goal than what he might have had growing up. Originally from New York, Waka relocated to Riverdale, GA when he was 9 years old, over a decade before his music profession materialized.

"Swear to God, I liked drug dealers and basketball players when I was growing up,” Waka says of his childhood role models. "It was either sell drugs or play basketball.” But now an entirely different set of doors has been opened for him, and he feels it's important to let others experience his life through lyrics. "It's just a struggle. You gotta make people believe in what you went through in life. You gotta emphasize that and make them feel it, and at the same time make it entertaining.”

With a clear purpose behind his music, Waka is presently working on the double-disc sequel to his debut project. He's also contributing to the 1017 Brick Squad mixtape, a group which consists of Gucci Mane, OJ da Juiceman, Waka, Wooh the Kid, Frenchie, and more.

"We're like the new N.W.A,” Waka says. And even while comparing his labelmates to the legendary group, Waka explains why he does so well as a solo artist. "I'm in my own lane, I'm rapping my own way, doin' my own thang. I guess the shit I say touched so many people that they fuck with me.” 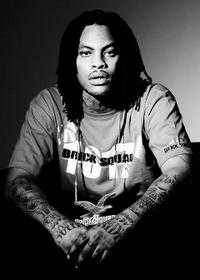