Virus is the greatest expression of the new wave in the Argentine rock. This group comes from La Plata City and started in 1981 with a very controversial style. Virus emerged as a result of the fusion of Marabunta with Los Violetas, both bands of the City Bell neighbourhood where the brothers Moura used to play.
Their first album was 'Wadu Wadu' and contained 15 themes. In those times, rock was concerned about social issues so Virus was considered frivolous for its dance style and its ironic songs.
In 1983 Federico Moura produced the first longplay of Soda Stereo. Behind, on December of that year, appeared the first massive disc of Virus, 'El agujero interior', with the end of the last dictatorship.
In the midst of 1984, Ricardo Sierra decided to leave the band for internal differences but then he was replaced by Daniel Sbarra. In a more techno-pop style they composed 'Relax'. A very new technology was used in that album, which included electronic drums and Midis in order of controlling in-sequence bases.
'Locura' had been recorded in New York and sold over 200,000 copies. It's Federico's preferred album and the one with the most sexual stuff, with songs like 'Una luna de miel en la mano', 'Sin disfraz' and 'Pronta entrega'.
On October 1985, Virus appeared in the Velez Stadium during the Buenos Aires Rock & Pop Festival, where also played INXS, Charly García and Miguel Mateos/Zas.
As a consecration of an extensive and excellent travel throughout Argentina, Virus recorded 'Virus Vivo' in the Obras Stadium on May 1986. By this occasion, new versions of all the themes were prepared. The song 'Imágenes paganas' was in that album. Soon after Virus continued its journey, but through Latin America this time. They went to Perú and Chile.
'Superficies de placer' was recorded in Rio de Janeiro between April and May 1987. It was a more selfish album: themes were composed without the intervention of the group like in the first years of the band. Besides, Federico Moura was infected by AIDS.
After almost nine months from its last show in Buenos Aires, Virus presented that new album in two shows in the Ópera Theatre. Everybody except Federico lose the force to keep going because all the band had been touched by the shocking notice of his disease.
'Tierra del Fuego' was the first album without Federico Moura and was edited in 1989. Federico had gone to the studio in the first two days, but couldn't continue. He was replaced by Marcelo Moura. Federico wanted the band to keep playing; that was his last desire.
Federico Moura died of AIDS on December 21º 1988. The presentation of 'Tierra del Fuego' was in truth in memory of Federico.
After the launch of that album, Virus split up.
On March 1994 they got together again because of nostalgia in a pub of Lanús county. They came back to the sceneries for the 112º anniversary of the city where they were born as a band: La Plata. Nearly 120,000 persons acclaimed them as in Virus' best times. On December of the following year, they played in The Roxy Disco. But for internal issues, Mario Sierra didn't appear so Aitor Graña played in his place.
On May 1998 (nine years after the 'Tierra del Fuego' album and Federico's death) Virus edited their last album, '9'. 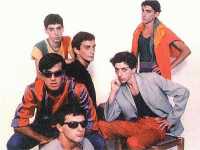