The Violent Femmes story is a story about a phenomenon which occurs every once in a while in the so-called music scene. The Beatles, the Stones, the Byrds, the Velvets, the Stranglers,.. the Femmes. Who knows why these things happen?

One could consider them as a movement against all these beautiful things you can see every day (including their consequences): boredom of life, religious paradox, the absence of basic moral principles, wicked social influences on adolescent kids (teen psychosis), mechanical human actions and reactions (lacking spontaneity), twisted relationships, misleading - false appearances and statements, false flirt, etc. - you name it.

It's a rage, a protest fueled by anger and angst, provocative and critical, stressed and frustrated - supported by music which ranges from country to psychedelic, so ordinary and yet so open to improvisation. The name of the band "Violent Femmes", an innuendo on "femmes" (slang for: "wimps"), speaks for itself. Looks like it's quite original to be a wimp after all, but hold on, it gets even better..

The Femmes originate from Milwaukee, Wisconsin, where they used to play in the streets in the early '80. The band was made up of three members: Gordon Gano (vocals & guitar), Brian Ritchie (vocals & bass) and Victor DeLorenzo (vocals & percussion). It was on these streets where they were discovered by James Honeyman Scott (the Pretenders) who heard them playing in front of the Theatre were the Pretenders were holding a concert. After that discovery the Femmes quickly rose to a cult band. I don't have the precise information when they released their first (self-titled) album. It was probably during 1982 or 1983. The group actually recorded the album "in secret" in the period between 1980-1982. Anyhow, the LP "Violent Femmes" became a true classic. Many fans regard it as their best album, featuring songs that became anthems: "Blister in the Sun", "Kiss Off" and "Add it up".

The cover pictures a little girl (the daughter of Lowell George, the rhythm guitarist of Frank Zapps's Mothers), all dressed in white, peaking through an open window of a decayed wooden door. With this symbolic scene, the Femmes started their tradition of saying things in their own ambiguous, sarcastic and very defiant way.

Being a new uprising band they were instantly targeted by the press and critics; limited minds trying to squeeze everything in their tiny little patterns - and getting enormously upset and repulsive to anything that doesn't fit in these patterns. The Femmes' music was one of those things. Always being compared to the Velvet Underground or the Modern Lovers, they developed a natural ironic attitude: "Lou Reed was my babysitter." - Gano

Gordon Gano, the songwriter, lead singer and guitarist of the Femmes (son of a baptist minister) was born on June 7th, 1963. He is quite devout and religion had always been a moot point between him and the atheist Brian Ritchie.
"We discuss it, and expose each other to different viewpoints, but I wouldn't say it was arguing. We're tolerant. I disagree with Gordon's religion, but that doesn't mean that I shouldn't tolerate him." - Ritchie
Open minded and ready to talk about every subject, the Femmes didn't let religious disputes hinder their careers. Unfortunately, not everyone was unprejudiced like them for Gordon was kicked out of the National Honor Society for performing "Gimme the Car" at his graduation ceremony.

Brian Ritchie, the bass player and vocalist was born in 1960. His solo projects "No Resistin' a Christian" and "Religion Ruined My Life" prove the fact that he is an atheist, refusing to believe the conservative idea about the existence of a supreme, almighty being.

As he stated, he used to listen to a lot of jazz with the Femmes' percussionist DeLorenzo, and jazz was surely a great influence on these two members of the band. Improvisation is another important motive which comes with jazz. "It's a natural part of our vocabulary. It's not like we set out and said, 'Yeah, let's play rock music, but let's jazz it up.' It's just that we like jazz, we know it, and can draw upon it when necessary." - Ritchie

Ritchie plays instruments such as the xylophone or marimba, but his main device is a large amplified Mariachi-type acoustic bass guitar.
"The first record I can remember buying on my own was 'She's a Woman' and 'I Feel Fine,' a single by the Beatles, but that was after they'd already split up. I found it at a rummage sale. I said, 'The Beatles - I heard about those guys. Maybe I'll check 'em out. Ten cents - what the hell, I'll listen to it.' Then decided I wanted to play guitar." - Ritchie
Switching to bass came naturally ..
"There are tons and tons of guitar players and hardly any bass players. Most guitar players try to play bass, but they're completely baffled by it. You'd think that there was no relationship between the two instruments by the way that guitar players try to play bass. But I had a natural talent for it, so I was stuck. Eventually I grew to like it." - Ritchie

Victor DeLorenzo was born on October 24th, 1954. Before the Femmes, Victor played with Ritchie in a band called "Hitler's Missing Testis". He usually played on a small drum kit using brushes instead of drumsticks. You could guess that with such a rudimentary equipment, the Femmes couldn't match the volume level of other similar bands, but ..

"The volume is definitely premeditated in that we thought, you know, it's absurd the way you have to play at a certain volume or else it's not rock & roll." - Gano

"It's gotten to be such a ridiculous, sick thing in rock music - it's completely unnecessary and totally appalling. There's no reason for it, and I cannot understand why virtually every rock band I've ever heard conformed to this incredible volume level." - Ritchie

Although their debut album was a multi-platinum success, The Rolling Stone Magazine did't put it in its list of the 100 most important records of the 80's. Why? They probably didn't know under which category to put them. Nevertheless, songs like: "Add it up", "Prove My Love", "Gone Daddy Gone" and lyrics like: "People worry, what are they worrying about today?" will never be forgotten.

"You may find this record next to impossible to find because they're sold as soon as they're puf on display. I stopped into a store, noted they had four copies, went away for no more than 15 minutes to get some money, and when I came back there was only one copy left, and there were two people busily searching through the V's." - Kristian Lawson, Daily Cal Magazine (UC Berkeley)

"I've heard that our first album was the only record to go platinum without being on the charts." - Gano 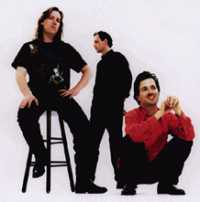