Viento en Contra is a Guatemalan rock band formed in 1995.

Headwind began about 1994 when Francisco Cabrera and Ortiz met at the home of Edgar Pereira to rehearse some familiar topics of the day. As time passed, the bassist, Antonio Colom, joined them and gave their first performance at a bar in Guatemala City in 1996.1

In subsequent years, the quartet appeared in cities in Mexico and the United States and is also opening for artists such as Juanes, Sin Bandera, Mana, Nek, Elephant, Chayanne, Benny Ibarra, among others, including the Beatles concert in the racecourse south, in December 1998, before more than 90,000 people.

In 2001, Edgar suffered a severe asthma attack, which caused his death in that year. The group retreated after suceso.1 Then the group decided to continue, with several concert tours throughout Guatemala.

In 2005 they recorded their fourth studio album in Mexico City, called Mala Fama, which is composed of twelve new album titled premiere now canciones. Casino, which already promote national and international level with his first single "Tremble the ground. " 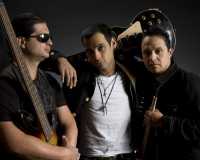