Veruca Salt is back. The last eighteen months have found Louise Post with her ax to the grindstone. The record is Resolver. The songwriter, voice and driving force behind the vessel is Louise.

In the wake of the departure of former co-singer and co-bandleader Nina Gordon in February of 1998, Post dove headlong into the recording of Resolver (Beyond Music). Thirty songs later the prolific priestess has whittled down the material to the 14-song album which she considers to be her most emotionally cathartic, turbulent and honest body of work to date.
Needless to say, this is not Louise’s first barbecue. Formed in 1992, Veruca Salt took the rock world by storm with their commercially and critically acclaimed 1994 album American Thighs (Minty Fresh/DGC), produced by Brad Wood.

Their first single, "Seether" became and still is an alternative radio staple. In 1996 Veruca Salt released Blow It Out Your Ass, It’s Veruca Salt, a 4-song EP recorded and mixed by Steve Albini. The band’s 1997 second full length album, Eight Arms To Hold You (DGC/Outpost), was produced by Bob Rock and achieved similar success. Veruca Salt has toured the world a couple of times, and hundreds of shows later, are preparing to traverse the globe again.

Over the past 18 months, Post has been consumed with re-designing the world of Veruca Salt. She discovered Soundgarden and Rage Against the Machine, began eating (red) red meat again, found her ideal producer in Brian Liesegang (formally of Filter and Nine Inch Nails), assembled a fabulous new band and ditched the corporate conglomerate that had absorbed her beloved Geffen Records, for a more appealing joint venture with Beyond Music. With this new record deal, Post has been granted her very own vanity label, dubbed affectionately, Velveteen Records.

On the heels of a six-year partnership, it was both startling and exhilarating for Louise to find herself suddenly in sole custody of her band and her future. A year and a half later, she has grown into her role as the exclusive leader of Veruca Salt. "We don’t let up for anything. Everyone who has worked on this record has shed his or her own sweat and blood. It has been a labor or love and a collective commitment that has been astonishing and touching.

I am now my sole proprietor, my own guide and my own nurse, and in my mind, that has made for a better music."
Veruca Salt is now comprised mainly of Louise, who shouldered most of the guitar, singing, and songwriting duties, along with Jimmy Madla on drums, Stephen Fitzpatrick on guitar, and Suzanne Sokol on bass and vocals.
Recorded in many different locations, over time (and at any time), Louise and producer Brian Liesegang, took Veruca Salt to new artistic heights. According to Post, "Many of the most inspired moments on this record emerged in the wee hours when the streets were quiet and the rest of the world was sleeping…" For six months, the band lived in a virtual cocoon, entertaining, exhausting, fusing and debating the individual ideas, parts, moods and melodies that melded ultimately in Resolver. "I wouldn’t trade our windowless hours for anything" she says, "That’s where the magic happens."

The updated Veruca Salt is a virtual love fest. The band is anxious to break out their amazing new material on stage, and to bring to life the mutual vision, respect, passion, dedication and true friendship that have brought them together. 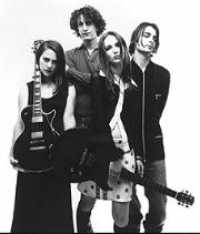