Veronica Sandra Karin Maggio (born March 15, 1981 in Uppsala) is a Swedish singer of Swedish and Italian origin. She won the category "Årets nykomling" (Newcomer of the Year) in the Grammisgalan 2007.

In March 2006, Maggio released her debut single "Dumpa mig" (Dump Me); the video for the single soon became the hit of the week on TV stations like ZTV. Her other single after "Dumpa mig" was the song "Nöjd?" (Satisfied?). She signed a contract with Universal Music and went on a tour in Summer 2006.

Maggio's debut album is called Vatten & bröd (Water and Bread). The lyrics and music were written by Stefan Gräslund, except for the rap verse in "Vi har, vi har" (We Have, We Have), which was written by LKM Kristoffer Malmsten. On March 26, 2008, Maggio released another album – Och vinnaren är... (And the Winner Is...), which she wrote and recorded together with Oskar "Kihlen" Linnros.

Maggio went to high school in Uppsala on Bolandsskolan's music department and was also the lead singer of the group Solitude, with other members Daniel Fredriksson, Marcus "Gonzo" Berglund, Karl Jansson, and Kristoffer Hoflund.

In 2009 she enjoyed some success in Norway and Denmark with her single Måndagsbarn (Monday child) reaching 1st position at the Norwegian charts,[2] as well as being A-listed on the Norwegian radio station NRK P3, and the album Och vinnaren är... broke into the top 40 albums list.

In 2011 she released the album Satan i gatan, which was a success. It reached the 1st place in Sweden, as did the single Jag kommer. 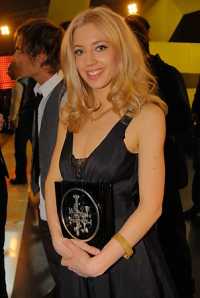