Velocity Girl was an American indie rock band formed in 1989 in College Park, Maryland, although it was generally known as a Washington, DC-area band. The band released three albums before splitting up in 1996.

The band started as the duo of Kelly Riles and guitarist/singer Archie Moore (also of Black Tambourine) in 1989 (the two having met at university), initially going under the name The Gotterdemocrats, becoming Velocity Girl with the addition of Brian Nelson (ex-Big Jesus Trashcan, also of Black Tambourine), Jim Spellman (ex-High Backed Chairs), and lead singer Bridget Cross (soon to join Unrest).

The band took its name from a Primal Scream B-side which appeared on the influential C86 compilation album. Sarah Shannon joined to replace Cross after the release of the band's debut single "I Don't Care If You Go". While much 1990s rock music featured an abrasive vocal and instrumental style, Velocity Girl's sound, especially post-1993, was more melodic and typically featured "clean" (non-distorted) electric guitar sounds and two-part harmonies; the band described their influences as "the Rough Trade and Postcard labels and some of the early Creation bands".

However, on their first seven-inch records on Slumberland and Merge, as well as their first Sub Pop album, Copacetic, Velocity Girl were noted for their shoegaze influences. The band was noted for its love of releasing a steady stream of 7" vinyl singles. Slumberland Records was formed in 1989 by members of several D.C.-area bands, including Velocity Girl.

The group disbanded in late 1996 after playng their last show "The Buzz Bakesale", in West Palm Beach, FL. Coincidentally, this was the same time that the career of Lush, the band to which Velocity Girl were most frequently compared, ended as well. Shannon, Riles and Spellman reunited in a short-lived project called Starry Eyes, releasing one EP in 1998.

Moore had already formed Heartworms before Velocity Girl split up, and later formed The Saturday People with Terry Banks of Tree Fort Angst.

Sarah Shannon went on to release her self-titled album in 2002. There was one Velocity Girl reunion show played at the Black Cat in Washington, DC on June 9, 2002 to benefit original vocalist Cross. 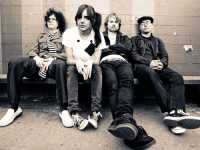