That’s right, V-Ice -- the artist also known as Vanilla Ice—returns with a brand new album and a brand new attitude. Hard-nosed and harder-edge, this time, says Ice, "It’s all about keepin’ it real." Bi-Polar, a double CD packaged as one and presented in two parts – Skabz and Tha System – is Ice’s first disc in three years, and the proof is in the industrial strength grooves he’s laid down. It’s a massive attack: the Iceman is back. With a vengeance.It was just over a decade ago that Ice first stormed the music scene with his monster debut album, To The Extreme, which was certified 7x platinum a mere four months after its release and went on to sell 15 million records worldwide. One of those just-right-for-its-time pop culture phenomenona, Extreme topped the charts at #1 for 18 weeks. The ever-present "Ice, Ice Baby" was a platinum-plus single, another single, "Play That Funky Music White Boy" went solid gold, and MTV was lovin’ it all.

Black or white, GRAMMY®-nominated, People’s Choice-awards laden Ice was the hottest rapper in the land, on top of the world. Or so you would think. Soon enough, the trappings of instant success and the glare of the spotlight melted Ice down. It wasn’t all wave riders and parties at his sunny south Florida mansion. There was the critical backlash, the 'playa hatin’,’ the self-destructive abuse, the violence, the follow-ups that didn’t live up. Once a multi-platinum poster boy, he turned into one for bad behavior and ‘Least Wanted’.

V-Ice himself had trouble figuring that last one out, and he went through some very dark times indeed before coming out the other end with a new commitment to life and to working through its often-harsh realities. A personal connection to God came, as well as marriage and two daughters along with an approach to making records that helped in exorcising his demons so they wouldn’t drag him down again. "It’s emotional therapy caught on tape," says V-Ice, "I use the music to expose things that I have seen through my own eyes, and the music has changed because my life has changed. It’s not about some image or gimmick…it’s all about the music." Bi-Polar, on BMG-distributed Liquid 8 Records, is made up of 24
original tracks in a two-part opus, and you can literally feel the release rising from the smoldering grooves.

Ice teamed back up with Executive Producer/Manager, Tommy Quon, to record the new album. Produced by Ice, Bi-Polar features a who’s who of rap, rock and hip-hop masters lending their flavas including Chuck D., Insane Clown Posse, former Slipknot-er Josh Brainard, and Wu-Tang’s LA Tha Darkman. Ever since "Ice, Ice Baby," life has been a wild and crazy ride, and on his latest work, Ice has managed to translate that experience into an explosive new sound. Maybe hell has frozen over…and that’s a lot of Ice. 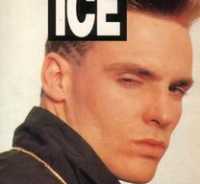