Vanessa was born in the Paris suburb of St. Maur on 22 December, 1972. Her first public performance was at the age of seven, when her uncle Didier Pain, a record producer, entered her in the amateur talent show "L'école des fans". She sang "Emilie Jolie" on French TV on May 3rd 1980.

Five years later, her uncle recorded her singing "La magie des surprises-parties". It was never released as a single, but it led to a meeting with the composer Franck Langolff and the lyricist Etienne Roda-Gil, who promised to write a song for her. "Joe Le Taxi" was released in 1986 which went on to be a hit all over Europe when Vanessa was just 14 years old. In 1987 she released her first album "M & J".

Her first film "Noce Blanche" was released in 1989 and then the following year her second album "Variations sur le même t'aime" was released. This album was made with the help of Serge Gainsbourg.

In 1991, Vanessa signed a three million franc contract with Chanel, to be the new face of their perfume Coco. She appeared in their advertising campaign as a bird in a gilded cage, photographed by Jean-Paul Goude.

Her third album saw her collaborate with Lenny Kravitz in New York and was released in 1992.

Her second film was Jean Becker's "Elisa" in 1995 when she co-starred with Gérard Depardieu who said "I was constantly surprised by the force which she gave off. She has all it takes to be a great actress."

Vanessa is currently living in Manhatten, New York and her third film "Un amour de Sorcière" has just been released in France. 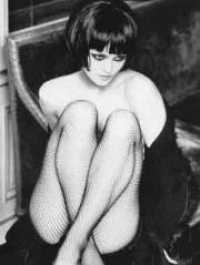