V6 is a six-member Japanese boy band formed by Johnny & Associates. The group debuted on November 1, 1995 with the single "Music for the People", which was used as the image song for the World Cup of Volleyball in 1995. Their first four singles, including "Music for the People", were all cover versions of the same-titled eurobeat songs composed by Italian producers such as Giancarlo Pasquini, Andrea Leonardi, Alberto Contini, Sandro Oliva.

Similar to their agency seniors Hikaru Genji, the group is separated into two subgroups based on age. For V6, the group is split into 20th Century and Coming Century, which consists of the three oldest members and three youngest members respectively.

From 1997 to 2008, V6 hosted their own variety show Gakkō e Ikō and is hosting Viva Viva V6 since 2001 on Fuji TV. Along with their group shows, the members also have individual TV shows, dramas or radio programs.

V6 celebrated their tenth year anniversary in 2005, commemorating the event by holding about thirty concerts in sold-out arenas all over Japan, holding 3 major "Thank You Events", releasing the movie Hold Up Down and releasing Musicmind as their new album. They also had a rare "Handshake Session" with hundreds of thousands of fans in Tokyo, Nagoya, Osaka and Fukuoka. 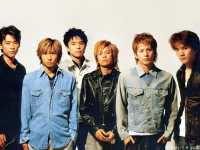