"With every album, I try to better myself. I'm a perfectionist and with the success of my last record, I wasn't sure about where my growth should be - as a performer, as a vocalist. I always felt like I held something back on my albums - on every album, I was playing a 'role'. This time, I decided to shake my fears and allow my personality to come through. I've really 'lived' this album: I'm in a healthy place right now. I'm 25-years old and I'm dealing with my responsibilities as a man and I'm not afraid to speak, to be realistic and talk about the issues men deal with [in relationships]."

International superstar Usher is speaking about CONFESSIONS, his fourth album following global multi-platinum sales for 2001's 8701 set – an album which launched his career to superstar status, a true crossover success. CONFESSIONS debuted at #1 on the Billboard 200 and Top R&B/Hip-Hop Album charts, setting an astonishing seven Soundscan sales records and selling 1.1 Million albums the first week. Usher explains "because I'm telling on myself. If you loved the last record, you'll definitely love this one. I think it's innovative. Life imitates art and I think this is my best work yet. It's a complete picture musically - I feel like when people listen to this record, it's like listening to an audio movie..." Worldwide, Usher has sold twenty-four million albums, both domestically and internationally.

Demonstrating a new level of vocal and creative maturity, CONFESSIONS features several songs co-written by Usher. Fred Bronson of Billboard Magazine adds that Usher is in "extremely rare territory" being the first solo artist to land three hits inside the top 10 in the same week, matching The Beatles in 1964 and The BeeGees in 1978. Those three hits being "Burn" at #1 on the Hot 100 for 2 consecutive weeks, "Yeah" featuring Lil'Jon & Ludacris at #4 (previously spent 12 weeks at #1) and newest single "Confessions II" at #8. Even beyond those singles, lies examples of the lyrical honesty that the multi-talented entertainer brings to his latest work abound. There's "Truth Hurts" (produced and co-written by super hit makers Jimmy Jam & Terry Lewis) which Usher reveals "is a very personal song. Some men don't have the guts to say what they feel but I'm not that kind of guy - I have to fess up! Basically, the song is the story of a man who knows he's done wrong but he's accusing his woman, figuring that by confronting her for whatever she's done, he can cover up what he's been doing. You know, like the accuser is really the one who should be the accused! But if you have a conscience, it's gonna get you and the truth is going to come out anyway ... "

"Superstar," co-written by Usher and produced by Vidal & Dre has an imaginative lyric, referencing Usher's many female fans worldwide. "It's got lines like, 'you are my superstar, I am your Number One1 fan, I'll be your groupie, baby, give me your autograph, I'll sign it right here on my heart!' I think it's a brilliantly-written song," says Usher, "and honestly, I think it's one of the best vocal performances on this album. I definitely wanted to show my growth vocally and you can hear it on tracks like this one ... "

Co-written with Brian Michael Cox and Jermaine Dupri, who also produced the song, Usher's "Burn" is a beautiful slow jam that the multi-talented artist considers "a signature Usher track. After doing this many albums, there's a sound people know me for and you can hear that on ‘Burn.' It's a real 'heartbreak' kind of song in which you know a relationship is falling apart, you know you want to just be friends but it's rough. Every time you talk to her on the phone, you get this feeling in the pit of your stomach, like an ache. There's that feeling of loneliness - it's over and you can't get it back." While he won't say whether the song reflects a specific experience he's been through, he confesses that "Follow Me" (another Vidal & Dre production) is based on real life. "A lot of women see me and they think that my life is just all about videos and shows and making records. But there's more to my life than that and this song is about a woman who treats me like a for-real, regular guy ... "

No Usher album would be complete without at least one or two all-out party songs and "Yeah!" (featuring Ludacris) fits the bill. Produced by Li'l Jon, the track is the first single from CONFESSIONS and is already a bonafide 2004 smash! Notorious for turning out non-stop hits, such as Grammy-winning "U Remind Me," "U Got It Bad" (a single that reached a record-breaking 149 million in audience first week) and "U Don't Have To Call" (a second 2002 Grammy winner), Usher ensures his place as one of today's most successful recording artists with numerous prime cuts from his last four albums. On CONFESSIONS, likely stand-out tracks for instant reaction from Usher's many fans include "Simple Things," another tune produced by and co-written with Jam & Lewis, and two tracks, "Can You Handle It" and "Do It To Me," which leave little to the imagination!

Usher smiles when talking about "Can You Handle It," a tailor-made steamy slow jam: "I heard (producer-turned-artist) Robin Thicke's album and I thought it was pretty profound. I reached out to him and he was very excited about us working together although we didn't know where to start. He played me this song and it had like a double meaning. Yeah, it's very sexual but you could say that it's also about asking a girl if she can handle what you're about to say ... It's the kind of song you put on ... when the time is right! And yes, it could describe some real situations I've been in!"

Produced by Jermaine Dupri, the ballad "Do It To Me" is equally suggestive: "I call that my tribute to Prince because I have always been inspired by his greatness as an artist. The lyrics tell the story from a woman's perspective but it has some double and triple meanings!" Usher laughs. "Sure, it's suggestive but it's real. We both know what's on each other's minds. She wants me and I want her too ... and we're imagining how it's gonna be ... "

Whether he's being playful on tracks like "Yeah!" or serious on the album's title cut, "CONFESSIONS" (a song also co-written with Brian Michael Cox and Jermaine Dupri), Usher has every reason to be confident that the album will follow its predecessors into the upper reaches of the charts the world over. Considering where he's at this juncture, he says, "The mission in my career before now was to 'get' to the party! Now I feel I'm at the party!"

The Usher "party" really began after he and mother and manager Jonnetta Patton moved to Atlanta in 1993 when, at the age of 13, Usher was performing at a local "Star Search" competition. An A&R rep approached him from the Atlanta-based LaFace Records and after an audition with then-LaFace Records label chief Antonio "L.A." Reid, Usher landed his first record deal with the label. Prior to that, the Chattanooga, Tennessee native had been honing his natural talent singing at the St. Elmo's Missionary Baptist Church choir where mom Jonnetta served as choir director. Usher cherished singing so much that eventually he decided to turn his beloved hobby into a career: "I have been building my career since I was a little boy because singing had always been what I wanted to do. At first I thought about playing [professional] football, then I wanted to play basketball, but in the end it was all about the music. It's my biggest passion and my biggest joy."

After signing him to LaFace, Reid commissioned music midas Sean "P. Diddy" Combs to produce Usher's self-titled debut, which was released less than 12 months later. The ambitious project, which spawned the synth-heavy club single "Think of You," written by Arista label mate Donell Jones, provided the youngster with his first Top 10 hit. Teaming up next with hip-hop hit maker Jermaine Dupri and veterans Teddy Riley and Babyface in 1997 to produce his sophomore album, the seven-times platinum My Way, Usher converted a whole new legion of fans with chart-topping monsters like the saucy "You Make Me Wanna" and the romantic groove "Nice & Slow."

After releasing Usher Live in 1999, a compilation of hits and music medleys that he'd performed on the road, the singer, armed with an arsenal of producers, including Philly newcomer Edmund "Eddie Hustle" Clement and Mike City, as well Dupri, The Neptunes, and Jimmy Jam and Terry Lewis, dropped 8701 on August 7, 2001. Quickly heralded by critics as Usher's most definitive work to date, the project not only earned him his first Grammy win but it also helped to cement his role as one of the world's most multi-faceted ambassadors of groove.

Blasting into the new millennium with the eight-times platinum album, Usher hit the top of Billboard's pop charts with the party groove "U Remind Me" (for which he earned a Grammy for Best R&B Vocal Performance), and the confessional "U Got It Bad." Having already achieved more in his 25 years than most artists accomplish in a lifetime, the Atlanta-bred singer, songwriter, actor and producer has acquired a bevy of awards over the span of his career, including 2 Grammy Awards, 3 Soul Train Music Awards, a BET Award, a Nickelodeon Kids Choice Award, 2 Teen Choice Awards, 3 Billboard Music Awards, 3 R&B Hip Hop Conference Awards, 3 ASCAP Awards, a Blockbuster Music Award, not to mention countless other international awards from several countries.

Performing in front of sold-out crowds at the world-renowned Madison Square Garden in New York City to the prestigious Wembley Arena in London, Usher has toured Nigeria, South Africa, Australia and Europe. He has consistently shown that his triple-threat entertainer status is not a fluke. Aside from his four gold and multi-platinum albums, Usher is a dynamic dancer who's shuffled alongside Michael Jackson and Janet Jackson in their respective high-rated television specials—Michael Jackson's 30th Anniversary Special and Janet Jackson's "MTV ICON." In addition, Usher is a blossoming actor who has appeared in such films as Light It Up, The Faculty, She's All That, Disney's Geppetto and Texas Rangers. He's appeared in star roles on network television shows like American Dreams, Twlight Zone, The Bold and the Beautiful, Moesha, and Seventh Heaven.

With a career that keeps taking him to new heights of achievement and accomplishment, Usher remains - in his own words - "the master of the moment. I feel like I'm in the prime of my life, physically, emotionally, spiritually - and musically. And, knowing there is still love for me in the marketplace, that gives me energy." There is love indeed for Usher and his music the world over and that's one 'confession' he can make without a doubt. He is The Ultimate Entertainer "Usher." 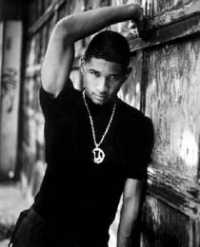