When Unleashed released their first album Where No Life Dwells in June of 1991, no one dreamed that they would go on to become one of the most consistent names in the underworld of death metal. Maintaining the same members, the sturdy Swedish quartet went on to release what amounted to nearly an album per year, following up their deadly debut with Shadows In The Deep in June of 1992, Across The Open Sea in October of 1993, Live in Vienna in February of 1994, and Victory in March 1995.

Unleashed have remained loyal to their fan base all the while. They steadfastly defy trends and focus on the music which comes naturally to them, rather than forcing a transformation into something which would appeal to a wider -- and undoubtedly less faithful -- audience. Keyboards, strings, lilting female vocals, samples...all of them are fine embellishments in their own right, yet none of them have a place within Unleashed's lethal repertoire. One listen to "Victims of War" off Victory will confirm that Johnny hasn't softened his vocal approach one bit, either. The band feels that anything less would be a disservice to their fans...it's the same approach shared by bands like Slayer and AC/DC, bands that have succeeded doing what they do well and a refusal to dilute it.

Another proud tradition of Unleashed is their dedication to their Nordic heritage, something which Johnny has kept alive in lyrical tales such as "The Defender" and "Precious Land", each of which seek to keep the strength and honor of the Viking bloodline intact. With a varied mix of songs that run from a slow, churning crush ("Hail The New Age") to an adrenal rush ("Scream Forth Aggression"), Unleashed have all but assured a space for themselves in the musical wing of Valhalla. 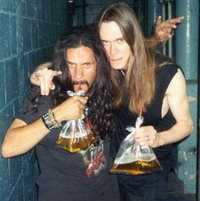