Uncle Tupelo was born in the tiny railroad town of Belleville, IL, when high school friends Jay Farrar, Jeff Tweedy and Mike Heidorn started their mutual quest to blend their punk rock roots and their increasing fascination with the traditional songs and sounds of American roots music.

With the exception of their fourth album Anodyne, the UT catalog has been out of print since Farrar (Son Volt, solo) and Tweedy's (Wilco) successful bid to retrieve the rights to those recordings. Since then, die-hard fans have been left to scour used CD bins and the internet for original UT CDs, bootleg shows and mythic studio outtakes. Until now. Beginning with Uncle Tupelo 89/93: An Anthology, Columbia/Legacy, along with the band, will reissue all of the Rockville UT albums: No Depression, Still Feel Gone and March 16-20, 1992 - all with stunningly remastered sound, amazing bonus tracks and expanded packaging.

So if you haven't heard them - or maybe just heard of them - now's the time to re-discover one of the most important bands of our time... 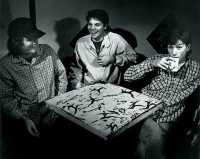