Known to friends and family as Matt Shafer, Uncle Kracker is the man behind the turntables in Kid Rock's Twisted Brown Trucker band. Now this kickin' DJ is ready to step out from behind the decks to take a well-earned piece of spotlight for himself.

Produced by Kid Rock his ownself and engineered by Mike Bradford (known for his work with Madonna, Anita Baker, and New Radicals), DOUBLE WIDE is the first non-Kid Rock record to be released on the American Bad Ass's own Top Dog/Lava/Atlantic imprint. The laidback Yin to Kid's thunderous metal Yang, Kracker serves up a tasty serving of funky Detroit rock 憂 roll stew, blended with Motown, country, southern rock, and hip-hop, topped off with the DJ/MC's own flowing, loose-limbed, story-telling raps. With irresistible tracks like the pop-alicious "Yeah Yeah Yeah" (currently featured in the new Jackie Chan flick, Shanghai Noon) or the anthemic "You Can't Take Me," who wouldn't want to hitch up to this DOUBLE WIDE?

A 13-year-old Kracker first hooked up with the young man who would be Kid Rock back in 1987. The two met at a Clawson, Michigan nightspot called Daytona's, where Rock was spinning in an all-ages DJ competition.

"He and my brother were competing against each other," Kracker recalls. "They became friends after that, but then me and him became best friends. I was just rappin' back then and he would record me."

When Kid Rock released his debut album, GRITS SANDWICHES FOR BREAKFAST, in 1991, he invited Kracker to join his band as DJ. The only problem was, the fledging rapper had no clue how to work the turntables.

"I didn't know how to scratch records or anything," Kracker laughs, "but I was cost efficient. I pretty much learned by playing at shows. I never set up in my bedroom and practiced ?my parents would freak if I turned it up. We did shows and it was do-or-die. I'd either fuck it up or I would look pretty good."

Needless to say, Kracker learned his trade well and soon became a master at the wheels of steel. Since then, he has served as best friend and musical foil to the Pimp of the Nation, co-writing and performing songs on all of Rock's records, including the mega-platinum DEVIL WITHOUT A CAUSE. Indeed, it was the success of that record that enabled Uncle Kracker to fulfill his long-in-the-works solo debut.

"I've always wanted to do my own thing," Kracker says, "and being with Kid Rock, that is a great outlet for me. Y'know, two heads are better than one. We write together, we play together. But we've always had a plan, to branch out and keep it all in the family. After 慏EVIL? happened, it was the right time for me to do my record."

DOUBLE WIDE was recorded at the back of the tour bus during Rock's cross-country treks with Limp Bizkit and Metallica. With all the well-documented hijinks and antics of a Kid Rock tour, it's a wonder that Kracker was able to stay focused on the job of making music.

"It was one big distraction, that's for sure," he laughs. "Between shows and rehearsals and photo shoots and interviews?not to mention the stuff that goes on the bus! But it kept me sober, because I knew there was something that had to be done.

"It's hard to record while on the road, though, " Kracker adds. "Especially having Kid Rock as producer, he's got so much other shit happening. He's doing remixes and movie soundtrack shit in between photo shoots and gigs and rehearsals, it's crazy. It probably took only three months to make my record, only it was over the course of a year."

As the bus cruised the highways and byways of America, Kid Rock and the members of Twisted Brown Trucker ?including keyboardist Jimmie Bones, guitarists Kenny Olson and Jason Krause, and drummer Stefanie Eulinberg ?all paid visits to the makeshift studio in order to contribute music to DOUBLE WIDE.

"We didn't change much," Kracker says. "We just played in my style instead of Kid Rock's. It doesn't have 慘id Rock Jr.' written all over it. I also think that we've all grown up a little bit and gotten better, just by being on the road."

In addition, the Kid himself stepped up to the mic for a guest appearance, dropping one of his trademark raps on "Heaven."

"Something inside me said 憂o cameos,' but it's kind of unavoidable," Kracker says of Rock's rhyming. "To not have him on the record, that'd just be stupid."

As you'd expect from two longtime friends, both Kracker and Kid Rock share similar musical tastes, from Run DMC's old school hip hop and radio rock heroes like Lynyrd Skynyrd and Bob Seger, to classic 70's funk such as the Commodores, and country-and-western outlaws like George Jones and Hank Williams Jr. DOUBLE WIDE features eleven tracks co-written by Kid and Kracker, including the soulful stomper, "What 'Chu Lookin' At?" (also included on the soundtrack to Mission Impossible 2), and the spaghetti-western groove of "Aces & 8's."

Considering the circumstances surrounding the making of the record, poignant pop songs such as "You Can't Take Me" and "Better Days" are fraught with the yearning emotions of life on the road, a world of hotel bars, fast food, and hours spent at a Monopoly board, a world where family and friends get further away with each passing mile. "It's not RUNNING ON EMPTY,' y'know," Kracker grins. "But yeah, it's a lonesome record. You get on the road and you start listening to songs like 慣urn The Page' and stuff like that. You don't feel sorry for yourself, but at the same time, you can't wait to get the fuck back home.

"We never really had a time to settle down and appreciate it," he says of Kid Rock & Company's explosive success. "Everything was gradual. Accommodations gradually got better, the venues gradually got bigger. We never had a time where we went on tour, played the chitlin circuit, went home, and then went out again and did clubs and then went home. We were just constantly on the road, for what, 21 months. My record deal was squeezed in the middle so the only way we could record it was being on the back of a bus. By the time it wound down, I was just glad to be the fuck done with everything I had to get done and go home for a minute and be with my daughter."

Longtime Kid Rock heads have been familiar with Kracker by his singular nickname. Alas, due to some legal issues, the DJ was forced to add the avuncular prefix to his moniker in the midst of cutting DOUBLE WIDE.

"I've been Kracker for ten years," he says, "and when we got the word that I couldn't use it, people suggested 慏J Kracker' or 慚C Kracker,' and I just couldn't do that. One day on the Kid Rock tour, I got sick, I don't know what the fuck I had, but I went home and missed two or three dates. Then I was going to meet up with the band in New Orleans but I got jacked around with my flights and ended up in Nashville. I had something like three layovers trying to get to New Orleans from Detroit! So I was in the Nashville airport and they've got all these posters of country artists: Hank Williams and Chet Atkins and so on. And I see this poster ?it was Uncle Dave Macon ?and I thought, why not Uncle Kracker? It sounds kind of pervy, or like the kids came home and hey, Mom's got a new boyfriend?

Current plans call for Uncle Kracker to take Twisted Brown Trucker out on the road ?just as soon as Kid Rock's summer stadium tour with Metallica finishes up. Rather than trying to recreate the mad and manic Kid Rock stageshow, Kracker intends to use his tour to show off the band's considerable chops.

"We're going to strip everything down," he says, "bring it back to just the music." - And it's the music of Uncle Kracker that's already turning heads some heads around. DOUBLE WIDE has drawn a number of early raves from the hard-to-please rock media, including Alternative Press, who declared it "a stellar debut disc of campfire blues-groove hip hop." Revolver's Andy Langer hailed Uncle Kracker's "blend of blunted hip-hop and melodic pop," noting that the album "may be even more immediately radio accessible than DEVIL WITHOUT A CAUSE."

Strong talk, but with Kracker's stylin' and profilin' sound, it won't be long before everyone is crying Uncle! 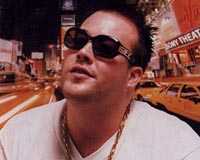