Being the biggest band in the world is a tough job, which is why U2 have sloughed it off now and then: Periods of arena-scale romance have been followed by bursts of odder experimentation, including a less-than-stellar Nineties stretch when the band were mired in irony, postmodernism and orange goggles. But for much of their career, U2 have committed to grabbing and holding that Biggest Band title the way they commit to everything — completely and passionately.

With Bono's soulful, grandiose cry, The Edge's intricately textured guitar parts, and the steady propulsion of bassist Adam Clayton and drummer Larry Mullen Jr., U2's sound is instantly recognizable and much-imitated. Inspired equally by the Ramones' punk thrust and Bob Dylan's insightful punditry, the four Irishmen went from Dublin dives to the Top Forty by applying Brian Eno's ambient concepts to three-chord transcendence. They went on to influence the global political agenda while continually tweaking — and sometimes completely making over — their sound. They have their critics: Some claim U2 confuses bluster for earnestness, egomania for importance. But hordes of longtime fans believe differently, and live for each U2 gig.

Brought together after Larry Mullen Jr. posted an ad on the school bulletin board, the band members began rehearsing together at Dublin's Mount Temple Comprehensive. None of them was technically proficient, but their lack of expertise generated inventive ideas. David "The Edge" Evans's distinctive chording style, for instance, stemmed largely from his inability to play complicated leads. They called themselves the Hype before settling on a moniker inspired by the American spy plane. The novice musicians quickly developed a following in Ireland and found a manager, Paul McGuinness, who remains with them to this day. They recorded independently before signing to Island Records in 1980.

U2's 1980 debut LP, Boy, was produced by Steve Lillywhite, who had worked with Peter Gabriel and the Psychedelic Furs. The album earnestly explored adolescent hopes and terrors, rejecting hard rock's earthy egotism and punk's nihilism. Bono was (and still is) a practicing Christian, as were the Edge and Mullen, and on their second LP, October (1981), the singer-lyricist incorporated imagery evoking their faith. Boy and October generated the respective singles "I Will Follow" and "Gloria," which got some airplay in the U.S. An American club tour generated further interest, thanks to U2's incendiary live performances.

Also produced by Lillywhite, War (1983) cemented U2's reputation as a politically conscious band; among its topics were "the troubles" in Northern Ireland, addressed on the single "Sunday Bloody Sunday." Another single, "New Year's Day," went to Number 11 in England and Number 53 in the U.S., while War topped the British chart and hit Number 12 Stateside. The group commemorated its 1983 tour with the live EP Under a Blood Red Sky, recorded at Red Rocks Amphitheatre in Colorado.

U2's next studio album, 1984's The Unforgettable Fire, was the first of several fruitful collaborations with Brian Eno and Daniel Lanois. Island was reluctant to let the band work with the onetime Talking Heads producer, but couldn't argue with the results, which found U2 expanding their sound into a widescreen dimension while losing none of the band's pointed attack. The album generated the group's first American Top 40 single, an ode to American Civil Rights leader Martin Luther King Jr., called "Pride (In the Name of Love)" (Number 33, 1984). The album hit Number 12 here, and the Irishmen supported it by headlining arenas around the world. In 1985 U2 was proclaimed "Band of the '80s" by Rolling Stone and made a historic appearance at Live Aid. The following year, they joined Sting, Peter Gabriel, Lou Reed and others for the Conspiracy of Hope Tour benefiting Amnesty International.

U2 entered the pop stratosphere with 1987's The Joshua Tree, a critical and commercial smash that topped the albums chart that year and spawned the Number One hits "With or Without You" and "I Still Haven't Found What I'm Looking For," as well as "Where the Streets Have No Name" (Number 13, 1987). The LP, again produced by Eno and Lanois, won the group Grammy Awards for Album of the Year and Best Rock Performance. In 1988 U2 wrapped up a triumphant world tour by releasing Rattle and Hum, a double-LP that combined live tracks with new material, and featured guest appearances by Bob Dylan and B.B. King. Rattle and Hum seemed bombastic to some critics; an accompanying film documentary also garnered mixed reviews. The LP nonetheless shot to Number One, and produced a Number Three single, the Bo Diddley-inspired "Desire" (1988).

U2 keenly felt the critical backlash and retreated into a Berlin studio to reinvent themselves again, with tremendous effect. The band's next LP marked a stylistic departure, featuring more metallic textures, funkier beats, and intimate, world-weary love songs. Achtung Baby reached Number One and received rave reviews. (at the time Bono was fond of saying that the album was the sound of "four men chopping down The Joshua Tree.") Hit singles included "Mysterious Ways" (Number Nine, 1992), "One" (Number 10, 1992), "Even Better Than the Real Thing" (Number 32, 1992), and "Who's Gonna Ride Your Wild Horses" (Number 35, 1992). Another track, "Until the End of the World," was featured (in differently mixed form) in Wim Wenders' 1991 film of the same name. Lanois, who produced Achtung Baby with support from Eno and Lillywhite, won a Grammy for his work.

In 1992 the band embarked on its Zoo TV tour, a flashy multimedia extravaganza that belied the rugged simplicity of its previous shows. Bono adopted a series of wry guises — the leather-and-shades-sporting Fly, the demonic MacPhisto—that he'd use for encores and, in the Fly's case, freewheeling press appearances.

In 1993, as the tour wound down, the band reentered the studio and made Zooropa, a quirky, electronics-laden affair co-produced by Eno, the Edge and engineer Flood. The album reached Number One and yielded the hits "Numb" (Number Two, modern rock, 1993) and "Lemon" (Number Three, modern rock, 1993), which also appeared on the soundtrack to Wenders' 1993 movie Faraway, So Close. Johnny Cash sang lead on the track "The Wanderer."

In 1993 the band renewed its contract with Island for an estimated $170 million. U2's contribution to 1995's Batman Forever soundtrack, "Hold Me, Thrill Me, Kiss Me, Kill Me," was a Top 20 hit. Also in 1995 the group collaborated with Eno as Passengers on a largely instrumental album called Original Soundtracks I; the only track to get attention was "Miss Sarajevo," on which Bono shared vocals with opera singer Luciano Pavarotti. Proceeds from the single's sales went toward war relief in Bosnia. The same year Bono and the Edge co-wrote with Irish folk singer Christy Moore a song about the peace process in Ireland, "North and South of the River."

In 1996 Clayton and Mullen recorded a rock version of the "Theme From Mission: Impossible" for the film starring Tom Cruise. It went to Number Seven on the pop chart. The following year saw the release of the electronica-heavy Pop; the album debuted at Number One in 27 countries, including the U.S., and garnered hit singles in "Discotheque" (Number 10, 1997) and "Staring at the Sun" (Number 26, 1998). U2 embarked on its next stage extravaganza, the PopMart tour, from 1997 to 1998. With a supermarket theme that played upon the concept of commercialism, the tour was even more grandiose than Zoo TV had been, with immense props that included a giant olive with a 100-foot-long toothpick, a 35-foot-high lemon, and a 100-foot-tall golden arch. At the tour's conclusion, U2 released a greatest-hits compilation with a remixed version of "The Sweetest Thing," previously the B side of "Where the Streets Have No Name." This time the song was released as a single (Number 63, 1998).

Bono returned to political activism in 1999, with much of his focus on fighting world poverty. He met with President Bill Clinton and British Prime Minister Tony Blair, as well as the Pope, as a representative of Jubilee 2000, a nonprofit group devoted to convincing nations to forgive third-world debt in the new millennium. He also co-wrote a song, "New Day," with Wyclef Jean of the Fugees; the single's proceeds benefited relief efforts in Kosovo and the Wyclef Jean Foundation. The pair performed the song at the United Nations, as well as at NetAid, a concert held simultaneously in London, Geneva, and New Jersey's Giants Stadium, while being simulcast live on the Internet, to benefit several causes, among them third-world debt relief and global poverty.

In early 2000, the Wim Wenders movie The Million Dollar Hotel, based on a story co-conceived by Bono, was shown at the Berlin Film Festival and released in many countries. Bono co-produced the film, made a cameo appearance in it, and U2 recorded three new songs for the soundtrack, one of which, "The Ground Beneath Her Feet," was written around lyrics by controversial author Salman Rushdie. In addition, Bono recorded tracks with Lanois and Eno as the Million Dollar Hotel Band.

U2 released an album of new material in late 2000: All That You Can't Leave Behind (Number Three), featuring the single "Beautiful Day" (Number 21), which won the Grammy Award for Record of the Year. "Stuck in a Moment You Can't Get Out Of" (Number 52, 2001) became something of an anthem for Americans recovering from the shock of the September 11th terror attacks. The disc was a polished version of U2's sound that rejected Pop's sonic quirks and signaled a renewed intent, with Bono proclaiming they were "reapplying for the job of the best band in the world." The band's Elevation Tour featured a heart-shaped catwalk in front of the stage which provided fans with close-up contact with the musicians.

In 2002, U2 performed at the halftime of Super Bowl XXXVI and issued a second greatest-hits collection, covering the 1990s and All That You Can't Leave Behind; it yielded a minor hit in "Electrical Storm" (Number 77, 2002). U2 released How to Dismantle an Atomic Bomb in late 2004, which entered the charts at Number One, proving U2 one of the few sure things in the uneasy rock marketplace of the new millennium. The disc continued to mine the classicism of their last album with positive results. Demonstrating a newfound flair for commercial deals, the rousing single "Vertigo" was featured in an iPod ad, and the group released a special-edition iPod loaded with all of its albums. It won nine Grammy awards.

Bono's activist profile continued to swell. His ongoing efforts at relief for Africa part landed him on the cover of Time's Person of the Year issue, with fellow millionaire-philanthropists Bill and Melinda Gates. In 2005 the band was inducted into the Rock and Roll Hall of Fame by Bruce Springsteen and opened the London leg of the Live 8 charity concert with a version of "Sgt. Pepper's Lonely Hearts Club Band." The following year came the self-explanatory U218: Singles package, which included a new song "Window in the Skies" and a cover of the Skids' "The Saints Are Coming" (Number 51, 2006) recorded in collaboration with Green Day. Proceeds from "Saints" benefited a charity established by The Edge to restore music programs in New Orleans schools hit by the Katrina hurricane. While the band worked on another studio album, they released the concert movie U2 3D, which was filmed during their 2005 Vertigo Tour.

After scrapping sessions recorded with Rick Rubin, the Eno/Lanois-produced No Line on the Horizon arrived early in 2009. In the interim, U2 had signed a 12-year deal with concert promoters Live Nation, who would now handle the band's merchandizing and sponsorship agreements. Horizon topped the chart, accompanied by two singles: the snarling "Get on Your Boots" (Number 37, 2009) and the more traditional "Magnificent" (Number 79, 2009). While the album didn't matched the sales of many other U2 albums, the U2 360° tour that kicked off that June in Barcelona was a blockbuster. The giant stage set, which featured the group performing in the round, was the largest ever constructed for a touring event. The band also announced that they will headline the Glastonbury Festival in 2010 on the occasion of its 40th anniversary.

Portions of this biography appeared in The Rolling Stone Encyclopedia of Rock & Roll (Simon & Schuster, 2001). Jim Macnie contributed to this story. 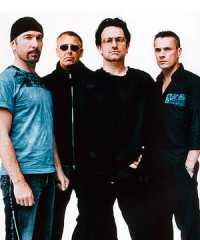