Prepare to be wowed by a bold and beautiful new force about to shake up the music scene - a stunningly refreshing new presence on the R&B horizon whose breathtaking songs capture both the heartbreak and joy of being alive. Or, as superstar hip-hop artist and executive, Missy Elliott puts it: "She hits that point of no return between love and hurt." Missy's talking about the new The Gold Mind, Inc./Elektra singing-songwriting-guitar playing sensation Tweet, whose debut album, Southern Hummingbird, is a sultry and soulful exploration of the heart. The charismatic Tweet is not afraid to explore love's darker passages with songs like the plaintive "Smoking Cigarettes," and the haunting "Always Will." The latter is a slow burning gauntlet thrown down from one ex-lover to another. "I wrote that to a man I dated for eight years," says Tweet. "I know he won't be able to love another like he loved me and I have no problem putting that into a song."

In fact, the entire album reads like a diary of the young vocalist's torrid life. Songs like "Motel" – "That's about when I caught my man coming out of a motel with somebody else," she says; and the prayerful "Beautiful" – "is about when someone so stirs your soul they make you lose your religion" – cover both ends of Tweet's incredible depth of range. The uplifting "Best Friend," dreamily swoops around her angelic vocals, while the Timbaland produced, hip-hop tinged, sexy-knock-around "Oops (Oh My)" - complete with a Missy-as-bad-girl interlude - rivals even Prince's most ravishing moments.

A quick glimpse into Tweet's journal might reveal that her real best friend just might be Missy Elliott herself. They met each other back in the day when they were both aspiring performers. Missy, of course, eventually went on to her own unprecedented solo fame, but Tweet languished under a heavy handed production deal that – as she puts it – kept her in a holding pattern with a group that never really got off the ground. "There was promise after promise that we'd make an album but it was always a trip. We were getting more and more frustrated." Tweet finally abandoned the project, depressed and penniless, she fled to her parents' place in Panama City, Florida.

For the first time in her life, the girl who was inspired to pursue a music career from her church singing days in her native Rochester, New York (she's been nicknamed Tweet ever since she can remember), was thinking of giving up her dream altogether. "It was worse than that. I was so depressed I began to contemplate suicide." Tweet says she even rehearsed how she would do it. "I was going to take a bunch of pills. I had gone through this period looking for any regular job I could find and coming up empty. My love life was deteriorating. The music business seemed a million miles away. I was just existing, hiding from my parents how deeply depressed I really was."

Miraculously, old friend and confidante Missy Elliott called Tweet the day before she was going to go through with her fateful plan. "The phone rang and I couldn't believe it was Missy asking me to sing background vocals on her […So Addictive] album. We hadn't spoken in a long time but I felt I could tell her the truth about how I was feeling because she and I had come from the same place having been through the same ordeal. I call her my guardian angel now because she truly rescued me from ending my life… She was God sent!

The songs, written on napkins and scraps of paper, seemed to serve as a road map of some of the more painful moments of Tweet's life. The singer picked up a guitar in Missy's studio one day and began to sing an acoustic version of "Motel." "She's one of the few female songwriters who doesn't try to sugarcoat anything," says Missy. "I could hear every ounce of what she went through in those songs." Tweet's impromptu audition impressed Missy so much, she had her bring the very same guitar to an encore performance for Elektra Chairman/CEO Sylvia Rhone. "It was all like a dream, really," says Tweet. "Especially when you consider where my head was at. I guess in a way, the music I was writing at the time was like my therapy."

Tweet cites the edgy "Complain" to prove her point. "I wrote that about my dark period. I was so filled with emotion about that experience that I took a gospel-laced groove I'd been working on and turned it into a little prayer to myself. I'm basically saying that because God took me out of that situation, I'll never complain again."

Tweet's strength also comes from her family. Both of her parents thrived in gospel groups, as well as being astute musicians. The youngest of five children, Tweet also learned her sense of musicianship from her siblings. Her three brothers and one sister have mastered, among other instruments, the piano, bass guitar and drums. "I think coming from a musical family centered me," says Tweet. "I inherited a real passion for music, and a respect for those who dedicate their lives to it as a career."

Tweet also looks to larger than life divas like Diana Ross, Aretha Franklin, and Tina Turner as role models. "They've been through so much and stood the test of time." She also cites Whitney Houston and Janet Jackson as influences, recalling that she really began to consider a music career when she attended the performing arts school in Rochester. "Even back then people used to tell me I had an old soul. It was the first time I was surrounded by so many creative people who were determined to follow their heart. I allowed myself to dream when I was there."

Tweet now makes her home in Atlanta, which has become the new musical mecca for many R&B singers. Asked if the twists and turns on the road to her long awaited debut album have caused her to change the way she looks at life, she pauses thoughtfully. "Everything happens for a reason. I think all the experiences, even the unpleasant ones, have made me stronger. You have to suffer sometimes in order to gain anything. I know there's a time and place for everything in this life."

And Tweet's time is definitely now. 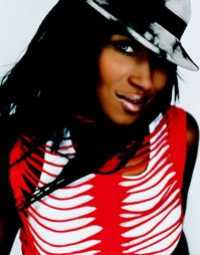