TURISAS were formed by Warlord Nygård and Jussi Wickström in 1997 in Hämeenlinna, a small city right in the heart of the pagan forests of South/Mid-Finland and named after an ancient Finnish war god. Their first recording Taiston Tie (The Battle Path, 1998) is still kept locked away and unreleased due to its poor sound quality. In 2000 TURISAS recorded their demo-CD The Heart of Turisas and, with the assistance of a few energetic live shows, started to catch peoples attention from both fans and labels.

In 2003 Century Media Records finally signed the band to a worldwide deal and the pre-production for their debut began with full power, so that everything was in place for the recordings of Battle Metal in Sound Suite Studios in France with producer Terje Refsnes (Tristania, Enslaved, Gehenna) in December of the same year. Several elements like parts of the vocals, choirs, pipes, acoustic and percussions were recorded in Steel Track Studio in Finland and afterwards everything completed in Sound Suite Studios in spring of 2004.

There may be many folk-influenced bands hailing from Finland nowadays, but TURISAS turn out to be the most diverse wild bunch, daring to even incorporate quite unusual influences as well as historic elements. The songs recorded are all very pagan battle metal, but we've never been afraid of taking our own path and bending the line between different genres and music styles. After all music should not be about genres, it's about creating atmospheres, explains the Warlord. Check out the modern loops or retro Hammond organ sounds in The Land Of Hope And Glory which splendidly mingle with its catchy, irresistible violins and the archaic choirs. Rex Regi Rebellis turns out to be the most epic song on the album. The tune, which simply must be heard in its entire diversity, is based on the Finnish poet Zacharias Topelius' historical novel Surgeon's Stories (or In Times of Gustavus Adolphus) which deals with The Thirty Years War fought in Europe 1618-1648. The battle is just about to begin, so grab your sword and join the ranks of TURISAS marching for war! 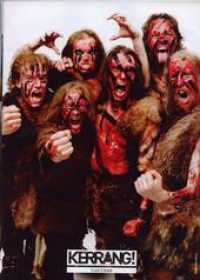