In mid-December 1996, an un-named band got up onstage at a rock festival on Durban’s North Beach with no intentions other than to play the five songs they knew and leave.

By the end of the fifth song, things had changed...

TREE63 began life as an experiment, when John Ellis phoned Darryl Swart in late- 1996 to talk about life, faith and rock ‘n roll. After the initial and unexpected success of that first live appearance, the band, not taking things that seriously at all and still un-named, resumed jamming in early 1997, rehearsing the songs that John was writing at the time. A few more live appearances in Durban later and the band began to realise that something special was happening. Soon, they had a name at last: Tree. And more songs. An album’s worth, at least.

A few months later, 1000 copies of Tree’s debut album “Overflow” were pressed and packaged, the album was launched, 5fm were playing the first single, “Glitter”.... and Tree broke up.

Or so they thought. In early 1998, Tree tentatively reconvened after a change of heart from John. A national South African tour supporting local heroes MIC, as well as a trip to Europe, started the ball rolling, and in July of that year, Tree traveled to the UK to make its debut at the Soul Survivor festival. The support from the UK crowds was nothing less than incredible, and Tree started looking more like something worth pursuing.

Tree returned to South Africa armed with a record deal with Survivor Records. Work began in April 1999 on the follow-up record, “63”. Released in July 1999 in the UK, and in December of that year in South Africa, the album proved that Tree did indeed have something special to offer. Unreservedly rock ‘n roll, yet fresh and compelling, and unabashed about its spiritual message and Christian convictions, the award-winning album spawned the hits “A Million Lights”, “Stumbling Stone” and “Treasure” (#2, #1 and #1 respectively on South African mainstream Top 40 charts).

In October 2000, TREE63 (the band’s name now incorporating its “63” identity) released its American debut. At the time, the band had already embarked on its first US tour, supporting US gold-selling Sonic Flood.

The self-titled US release went on to receive a Dove Award in 2001 for Rock Album of the Year , and the first two singles, “Treasure” (originally off “63”) and “Look What You’ve Done” (originally off “Overflow”) both went to #1 on The US CHR charts in 2001.

A South African tour in early 2002 saw the band selling out all the venues they played. TREE63 were once again back in the studio in mid-2002 to begin the follow-up to 1999’s “63”. “The Life and Times of Absolute Truth” was released on October 22 2002 on InPop Records, the first record of new TREE63 material in over three years. 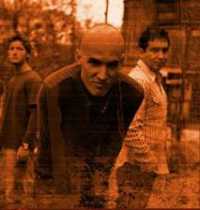