TQ isn't the first artist to combine hard-core hip-hop lyrical scenarios with a melodic r&b vocal delivery. But with this 18-track collection, he's taken this particular form to the next level of expression. TQ wraps his soulful, yearning tenor around the raw, uncensored language of the new melenia hip-hop generation, but uses that language to tell stories of cinematic detail and heartfelt emotion.

Case in point: The brilliantly sung, powerfully produced tribute track "Westside," the album's certified gold Top Ten single and hit video. Dedicated to late rap icons Eazy-E and Tupac Shakur, "Westside" gives props to the rappers who most influenced TQ's life and music. Taken on its own terms, the song is as much of an urban anthem as Stevie Wonder's "Living For The City"—and as tuneful as any Luther Vandross or Babyface hit.

"This song means a lot to me," he explains, "because it accurately reflects how I feel about real brothers like Eazy, Tupac, Too Short, and Ice Cube. They were all instrumental in giving a powerful global voice to Black kids who, without rap, might never have been heard.

"I had to be down with that, but in my own way. Most people rap about it—I had to sing about it."

TQ wrote every word on They Never Saw Me Coming, with the lion's share of the sparse, on-point production handled by Mike Mosley of Steady Mobbin Productions. Mosley's outstanding studio work with such artists as Tupac Shakur and E-40 speaks for itself. "Mike and I really like and respect each other," TQ acknowledged. "He's very serious about his work, like I am. By motivating each other, we both gave my project 110 percent."

"Bye Bye Baby," a Mosley/Ty Howard produced track, is based on a true story about a woman shot by a drive-by bullet meant for her man; it's followed by "The Comeback," a soul-searing track detailing the violent revenge wreaked on the shooter. "Darling Mary" is a playful ode to urban life's blunted reality; "When I Get Out," a pulsating ballad between TQ and Ericka Yancey, about an incarcerated brother's insecurity when it comes to his lover on the outside.

A horrifying drug-related incident from TQ's past was the source of "Remember Melinda"; "Make That Money" is a contemporary hustlers' theme song, featuring a guest rap by E-40 and another showstopping performance by TQ. "The bottom line," he states, "is that this album is about my life, the lives of the people that are close to me, and those that influenced me."

The artist known as TQ was born Terrance Quaites in Mobile, Alabama. Shortly thereafter, TQ's family moved to Compton, California, the birthplace of N.W.A. and other rap legends. TQ was raised in the church (he sang in the choir) but his real education came from the streets, where the first wave of hip-hop music became the soundtrack to his life. "From Monday to Saturday I was hangin', partyin', chasing girls, getting in trouble, and straight-up acting the fool," he admits. "But on Sunday my mother dragged me out of bed to go to church. That's where I developed my singing voice and learned how to make people feel me."

TQ was never a thug in the true sense of the word: His hard-working parents instilled positive values in him, and didn't hesitate to set him straight when he was wrong. At 16, when his mom found a gun in his room, she sent the teenager to live with an aunt in Atlanta. In retrospect, says TQ, "sending me down South saved my life. It made me straighten up—for awhile, anyway."

These conflicting circumstances honed TQ's survival instincts and his passion for music. "The little money I had to buy records was spent on rap," he notes. "See, I really wasn't much into my generation's r&b. I listened more to the old-school soul that my parents had in the house. So my music now is more a combination of that and hard-core hip-hop."

After working as an intern at A&M Records, TQ was tapped as the lead singer in a group called Coming of Age. In 1993, the group scored a Top 40 R&B hit with "Coming Home To Love" (Zoo Entertainment). TQ left the group in search of a solo career and landed a deal at Atlantic. But he says the label asked him to water-down his lyrics, and no album was ever issued.

TQ knows that the lyrical content of They Never Saw Me Coming is certain to spark controversy. But he refuses to acquiesce, believing that honesty, talent, and freedom of expression are on his side. "Like protons and neutrons," he theorizes, "life is about positives and negatives, little pluses and minuses. If you cover up the minuses then the pluses don't mean shit. That's why I'll never sugar-coat my lyrics to keep a record deal or to satisfy anybody else's view of what my music should be."

"What I love about my present labels is that they've given me complete creative control, and that nobody fucks with me about my songs. As an artist who believes in God, himself and his music, I couldn't ask for more than that." 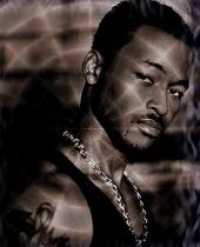