Danny grew up in Paola, KS. Relatively normal, an element of mystery was added to Danny's childhood when one day he spied his father with a large sword conducting a Masonic ritual. Danny would later notice himself performing similar movements when he began playing drums at the age of thirteen. As Danny progressed through high school and then college at the University of Missouri in Kansas City he began supplementing his studies in percussion with speculation into the principles of geometry, science, and metaphysics. A commitment to life as an artist brought Danny to LA where he was able to perform as a studio drummer with projects like Carole King and play around town with Pygmy Love Circus. He would later find an outlet for addressing a fuller scope of his potentials in Tool and another project operating under the title of Zaum. Despite not becoming a Mason or aligning himself with any other school of religion, Danny has maintained his heritages interest in occult studies. Endeavors into this realm have manifested periodically, such as the time he achieved insight into a hidden aspect of the unicursal hexagram utilizing an astral journey initiated through meditation and DMT. Danny then set up his drums into proportions utilizing the circle and square of the New Jerusalem and uttered a short prayer relating to the principles of the ace of swords from the book of Thoth. He then performed a ritual utilizing his new found knowledge of the unicursal hexagram to generate a pattern of movement in space relating to Fuller's vector equilibrium model. The resulting rhythm and gateway summoned a daemon he has contained within "the Lodge" that has been delivering short parables similar to passages within the Book of Lies. Danny recommends as a device of protection and containment a thorough study and utilization of the underlying geometry of the Temple of Solomon for anyone purchasing their next record.

Justin began his celebration of life in England where as a child you could often find him playing soccer with his siblings and friends. Sometimes Justin would catch himself mesmerized by the dancing and spinning of the ball sensing the possibilities of worlds within worlds. At the age of eight he began playing guitar and at fourteen started meeting and playing with the friends he would eventually form the band Peach with. Peach released the album"Giving Birth to a Stone" and later appeared as an opening band for Tool on several dates in England. Carrying with him a strange sense of alternate realities, Justin found himself able to access them through music and altered states of consciousness . When Tool needed a bass player in 1995 the journey to America seemed simple compared to the paths he had explored within his own mind. Currently Justin has been practicing entering hypnagogic states facilitated by sonic landscapes and a highly specialized form of tensor yoga. These function as the arc and threads that buoy and retrieve him from the watery matrices and emotional labyrinths he explores. He then utilizes these experiences as a reference point in his riffs and style to induce a holographic depth to Tool's music. Keep your eyes open for the scheduled re-release for Peach's "Giving Birth to a Stone" happening sometime soon.

One reason Maynard was drawn to L.A. in the early 90's was to explore the possibilities of sacred temple architecture and regeneration. Thus it is perhaps easiest to sketch a brief history of Maynard through some of the elements within his living space. The floor has a formation that's round on both sides and hi in the middle that is best measured with the equation DV/D = I (I being incidence); and a pack of gum, mo' happiness, and the apostle. Examining the wall introduces art pieces by Ramiro Rodriquez and themes best grasped through being Jung in Michigan. At the window frame a hairless cat stares intently outside at squawking irish parrots swaying drunkenly. Coast to coast some things never change. In another direction is a calendar of crossed out squares with A Perfect Circle scribed on May 23rd and "NIN tour" written under April 12th.

Adam's journey began in Libertyville, Illinois where, as a child, Adam began skipping Sunday school to read comics books at a nearby store. This rejection of the word of god in favor of the images of the comic microcosm carried over to school where Adam would draw pictures during teacher's lectures and think of music during math class. Adam studied violin as a child, but as Adam grew older he began to move away from the rigidity of a classical music and towards the sonic potentials of guitar playing. While most kids were involved in sports and homework Adam's musical talents and continued interest in comic books and sketching evolved into a desire for integrating and animating his ideas through the medium of film and the manipulation of three dimensional space through sculpture. Despite a film school scholarship offer Adam chose art school where he was able to hone his sculpting and sketching abilities. Still maintaining an interest in films Adam moved to LA and received training in make-up effects. He started a career working for Stan Winston's doing make-up effects and spent a few years working on movies. Maynard and Adam decided to start a band while keeping their day jobs...the rest is history. It has only been through the last nine years, however, that Adam has begun to explore the full potentials of projecting his thoughts and emotions through Tool's songs, videos, and album artwork. Sometimes in this environment, Adam is able to achieve a state of synesthesia where playing guitar invokes visions and images to appear before him and making videos, sketching, or sculpting creates auditory hallucinations of riffs and music. Currently Adam is sculpting a piece for the re-release of the Peach album Giving Birth to a Stone, writing music each day for the next Tool album with Danny and Justin, sketching the images he obtains in these practices, and dealing with the business side of the music industry. One way to perceive the experiences that have led to Adam's state in Tool is as the exploration of contrasting modalities of perception. As the hemispheres of the brain struggle for dominance there is a constant shifting of polarity between the right and left lobes that exists as music vs. number, image vs. word, being vs. doing, and holistic integration vs. linear abstraction. 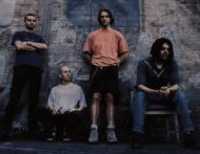