What’s your life like? Tony Yayo’s is real. G-Unit’s incarcerated scarface, who’s bounced in and out of federal penitentiaries during 50 Cent’s ascension to the top of the pops, is real, like milk. And his debut album, undoubtedly the most long coming and anticipated release from G-Unit, Thoughts Of A Predicate Felon, bleeds this reality. “My album is all fact no fiction,” says the 26 year-old Yayo, “Everything on there is things I’ve done or seen—as a matter of fact, most of the album was written in jail and that’s why the aggressive records are so hard.” Replete with brooding, violent beats, courtesy of super-producers like Dr. Dre, Eminem and Havoc of Mobb Deep, and vicious punch lines, Thoughts promises to be G-Unit’s most street release. “I been with 50 since day one, so I’ve studied the way that he makes records,” he says, “So I know you gotta make the club records and the records for girls, but I also know that what makes G-Unit G-Unit is we make the best street records in the industry.”

And no one is better equipped to feed the street than Yayo. Since a young pup, he let the gun buck, and it was this reckless abandon that attracted a teenaged 50 Cent to him back when they ran the Southside of Queens. All it took was a chance encounter on a Jamaica corner for the two to see their likeness in one another. “50, he could see in me that I live, and we both rapped too, so it was just a natural friendship,” says Yayo, who idolized rap legends like Big Daddy Kane and Kool G Rap, “So we started working together on the street and then when he started taking rap more seriously he took me along too ‘cause he knew I was nice.”

During the mid-nineties while 50 made inroads to the industry, working with Jam Master Jay and then the Trackmasters, Yayo got his rep up on the battle circuit bringing it to other Queens rappers like local stars, the Lost Boyz.. “I was taking everybody out back then,” he remembers. But just when 50 was about make his leap to stardom he was gunned down with the infamous 9 slugs. But the two, now joined by young boy Lloyd Banks, turned the seeming tragedy to triumph. “As soon as 50 recovered we went to work on the mixtapes,” says Yayo who loyally played his position despite the seemingly insurmountable opposition against them, “and that’s when he created G-Unit.” The trio went to war with the industry that was afraid to touch them and recorded “Bad News”, Yayo’s first official vocal appearance, and then went to work on 50 Cent Is The Future, which secured Fif his fortuitous Shady/Aftermath deal. Yayo stood out on the early mixtapes due to his unbridled energy and laugh out loud punchlines, which anchored the nimble wordplay of Banks and sing-songy fluidness of 50.

But during the summer of 2002, just when all the pieces were coming into place, Yayo caught a gun charge in his Queens neighborhood. Yayo threw caution to the wind and refused to turn himself in, instead recording countless verses for G-Unit mixtapes, as well as hitting the road with 50 on his fall tour. He was able to fully establish himself as a primary member of G-Unit, make a guest appearance on 50’s 11X platinum debut Get Rich Or Die Tryin’, and develop close relationships with Eminem and Dr. Dre. But, as he knew it would, Yayo’s charge caught up with him in December of ’02 when 50’s entourage was detained by the NYPD outside of the Copa Cabana nightclub.

“Doing that bid wasn’t easy, ‘cause I knew how crazy it was getting on the outside,” says Yayo. He did his time and by early 2004 Yayo was back in society and ready to record.

“I have the most love for Banks and Buck, because they held their albums so that they could make sure that I got a verse on them,” he says, “I only got the one bonus cut off on the G-Unit album and they knew it was important for me to get out there to get the buzz going again.” In addition, Yayo made stellar guest appearances on The Game’s triple platinum debut as well as 50’s already 5 times platinum The Massacre. All the while, trapped under ankle restraint parole, he crafted his album with the help of G-Unit co-founder and executive producer Sha $XL, who fed him strictly the hottest beats.

The result is a prototypical G-Unit album, with magnificent, universal beats, and a balanced mix of records for b-boys, d-boys and the ladies. “I’ve spent so long working with 50 at this point that I’ve more or less learned how to make great records, ‘cause he’s a master,” he says. And records like “So Seductive,” which Yayo actually conceived and wrote on his own before 50 added on his contribution, exemplify his dexterous understanding of songwriting. “I did that record before 50 did “Candy Shop” and that’s the reason that he said ‘so seductive’ at the beginning, ‘cause he thought my record was so crazy.” In addition to the crossover smash, the album has street bangers like “Homicide”, the Domingo produced murder rap which Yayo uses to kick off the LP, and the clever “Tattle Teller,” an ode to history’s most infamous snitches, as well slick ballads for that special lady, like “I’m Curious” and “Project Princess”, which showcase Yayo’s ability to step out of the street and into the bedroom with comfort and e ase, featuring R&B quartet Jagged Edge and crooner Joe.

Thought of A Predicate Felon is a balanced and well-rounded LP, if ever there was one. It clearly stands as a testament to Tony Yayo’s versatility, and his ability to stand on his own artistically. Though he receives helping hands from friends like 50 and Eminem, as well as Banks, Buck and Obie Trice (who, incidentally, delivers an incredible verse on “Drama Setter”, along side Yayo and Em) it is Yayo who shines throughout the album with his playful punchlines (“Steven Segal, I used to love his karate / But even he snitched on Peter Gotti”) and unmatched charisma. Tony Yayo can’t be stopped. He’s been patiently waiting, polishing his skills and preparing for fame and fortune for so long that it is doubtful anything can slow his roll. Real recognizes real, and Tony Yayo is the real talk of New York. Braaa-ttttt! 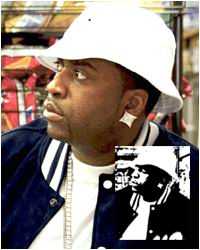